Uncommon Women and Others is Wendy Wasserstein’s classic play exploring the place of women in the changing world of 1970s American society. Telling the story of a group of friends at Mount Holyoke College, a Seven Sisters School, the play opens with a reunion between some of the friends and then proceeds to flashbacks showing their time at the College.

The staging of the play has been kept simple, with all props and costumes on stage and actors in place at all times. Opening with the full cast sitting around the edge of the stage reading or writing, the importance of words and literature in the world of the play is made very clear from the outset.

Mrs Plumm (Stephanie Wolfe) explains the nature and purpose of the College and its role in creating strong and capable women that they can be proud of. These snippets run throughout the play as an illustration of the College’s “public image” which contrasts throughout with scenes being presented. 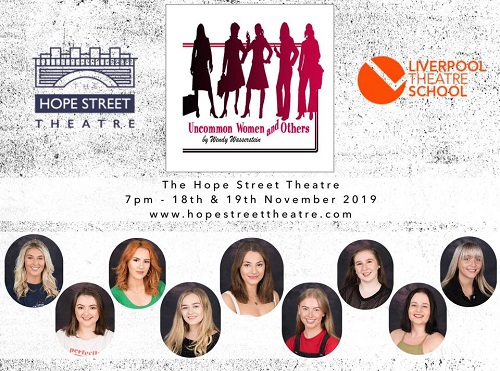 In other productions of the play, these elements are often done by an offstage male voice, as an illustration of male dominated world the women will be entering upon graduation. It is an interesting decision by Director, Wyllie Longmore to have these done by Mrs Plumm instead, but not one which seemed to add anything meaningful to the production.

The play is set in the very small and limited world of an elite college in 1970s America. It is very difficult to identify with any of the characters and matters are not helped by the fact that none of them are particularly likeable. While the cast portrayed the characters as having genuine and affectionate relationships, the affection between them was clearly very much on the surface and the superficiality of the atmosphere on stage meant that it was very difficult to connect with the action onstage.

This does mean that it is difficult to see what relevance this play has in today’s world. However, there are a number of scenes of blatant bullying which you could compare with today’s equivalent on social media. Further, the current political climate holds a certain level of nostalgia for the world of the past, and this is a good illustration that there were at least as many problems then as there are now.

It is an interesting illustration of the beginnings of feminism and shows the experience some women would have had at the time. It would however benefit from more varied and further developed characters, quicker pace and a more definite plot, rather than many small threads which quietly trail off.

Erin Keogh’s performance as Carter is very good with carefully guarded emotions throughout and a skilled way of remaining numb to what is going on around her. Amy Hoole’s portrayal of Kate Quin is excellent, with strong emotional expression nicely contrasting with Keogh’s poker-faced reserve.

Georgia Babb’s performance as Rita Altabel is brilliantly acted and is the most developed and rounded portrayal in the production. One of the more complex characters, Babb has clearly worked very hard on creating a polished and realistic portrayal.

The entire cast also deserve praise for maintaining character when in the background of scenes. As they sit reading, writing, changing their shoes, and so on, not one cast member ever lost their character’s presence or emotional state, which is very easy to do.

Uncommon Women and Others is a play of its time, showing a group of women who are about to step out into the big wide world with no real idea of what will happen to them there. This also makes it a play for today, where an uncertain world has once again brought these issues to the foreground. This is a very well-acted and original production of a classic play.

Uncommon Women and Others is being performed again at the Hope Street Theatre on 19th November 2019.