Constellations is an astounding text. Contemporary and received with universal acclaim on a global scale, it’s easy to see the attraction to staging this work. Fortunately, although What We Did Next’s production of the play fails to reach the heights this text is capable of, it is appropriately adventurous, explorative and avoids doing itself a disservice like so many amateur productions of this play have done before.

First commendations fall to Charlotte Wilson’s emphatic performance. An exceptionally concentrated and thorough stage presence, she navigates her way through the fractured narrative of Marianne’s (multiple) existence(s) with deft poise and precision. Grant Ryan Lenton’s portrayal of Roland offers flickers of similar excellence. Although he feels too restrained at times, there are moments when he demonstrates himself as a convincing performative conduit. The direction at times demonstrated a great theatrical fluency partnered by an evocative score. 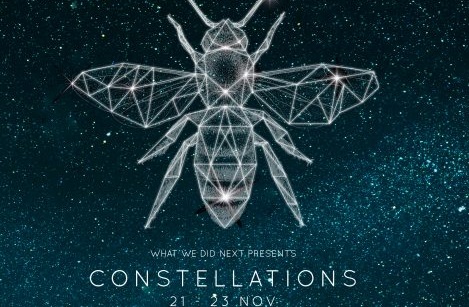 The piece possesses a strong comedic sensibility – well-timed and executed. However, the humour is perhaps played into too much at times. Entertaining they may be, the convincingly sketch-like nature of Roland and Marianne’s awkward encounters are invested in disproportionately, losing sight of the authenticity of their clumsily shared experiences that make this play so powerful. An unfortunate consequence of this is the respective character’s vague identities unto themselves. In actively playing up to a tone already provided by the text, our experience of these characters in their single moments as they court one another is lost. They have a clear identity as a romantic duo, but beyond their romance it is unclear to us who these people are, and thus our care for them is marred.

The score was often a refreshing addition to the apt bareness of the piece, unquestionably boosting of the more emotive scenes. I’m quizzical of the appropriateness of this, however, as it gave the play a cinematic feel at times that detached us from the characters. There were certainly moments of complimentary usage, particularly during the sequences of dance/movement and the necessary yet knowingly uninteresting scene (dramatically speaking) where the multiverse theory is explained.

Direction was well-handled despite challenging staging. Raised rostra and affronting proxemics allowed for an oddly confrontational tone for a piece so intimate and inviting. It was, however, used as best as possible for the vast majority of the play, particularly in relation to the dynamics in character relationships and how they manifest. For a relatively open text, there was an admirable amount of daring in its presentation. The changing of universes may have been somewhat rudimentary but there are only so many ways you can change a universe on stage in a few seconds. Beyond this, despite one particularly jarring movement sequence that felt unwarranted and unearned, the play knew its boundaries yet also where to push them, which is especially refreshing for an amateur production.

The general thinness of Roland and Marianne’s individual identity signals a lack of depth and humanity that makes them hard to connect to. Despite this, their moments of alignment as a couple (both conflicting and affectionate) make for this viewing to be a mostly positive one. This production of Constellations may leave some aching for a little bit more, but is ultimately a bold effort and adequately entertaining for the casual viewer.