In National Grief Awareness Week (2th - 9th December 2019), Manchester based company Talespin Theatre have given us a powerful play about the impact that grief has on one family and how each individual person in this family deals with the trauma and loss of a family member. At times, it’s not an easy watch and could be uncomfortable for some but Talespin handles the situations that arise with great care and sensitivity and the writers and co-creators Marissa Moore (who also directs) and Jordan Kennedy construct both meaningful and pertinent dialogue throughout the play.

Stages is not just about the phases of grief that people go through, it is more to do about the experiences and feelings that attach to each of these stages. The script (which is partly based on real events) is so well written and the acting throughout is outstanding, probably one of the best plays I’ve been lucky enough to review this year. 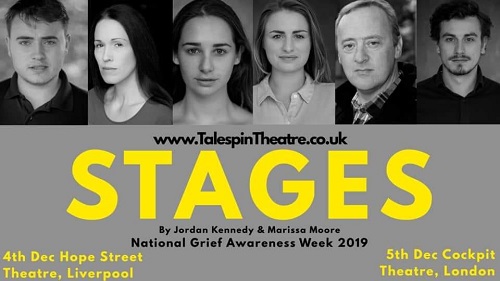 Ellie (C.C Hughes) is at uni and denying the grief of losing her brother, hiding from her painful feelings and pretending that it never really happened. Hughes performance is quite exceptional, emotional and at the same time, strong and very driven. She is just trying to keep her head above water with her pending studies but her façade is slowly crumbling and this will ultimately lead her into great danger. Seth (Jack Mcgarry) plays Ellie’s uni “boyfriend”, a cold and hedonistic character who is only really interested in his own needs – Mcgarry gives a nuanced and powerful performance.

Meanwhile back home in Manchester her family lead fractured lives. They also find it a struggle to recognise their grief and stand up to its negativity. Dad Ken (Will Travis) finds it difficult to articulate his feelings and they come out as angry put downs. Travis gives a powerhouse performance throughout, offering a finely balanced portrait of a man just trying his best to keep his family together after the death of his son. Mum Martha (Leigh Herron) is the heart and soul of her family, trying to strangle the grief until it’s gone and Herron’s sublime performance positively shines throughout the course of the play. Rue (Jessica Baskind) is Ellie’s younger sister and she tries to be a calming influence within her family but she is grieving also and hides it well. Baskind’s performance matches the quality of her fellow performers with a lively and honest characterisation. Finally we have Tom Leonard as the Narrator, a cheeky Manchester lad who sometimes breaks the fourth wall to offer his witty reflections and dry asides upon the developing drama. Leonard gives a commanding and energetic performance and offers the audience an extremely likable character.

The play is performed in the round to heighten the intimacy of what happens, with some excellent light and sound design. Stages works well on so many levels.

There is a final twist that I didn’t see coming and I won’t give any spoilers away but suffice to say, it’s pretty good and very unexpected. I don’t want to give the impression that Stages is a gloom and doom spectacular because it isn’t – yes, it tackles some dark and deeply emotional subjects but ultimately it’s about facing fear and grief and just trying to make do.

A superb ensemble, a cracking script and a thought provoking emotional journey into one family’s struggle with grief. If this production comes around again I would absolutely recommend it. Bravo! www.TalespinTheatre.co.uk