Bite Me! is an original comedy adventure story from Theatre on Foot director and founder, Kane Murray, ably assisted by Caitlin Clough, which centres around a group of centuries-old vampires living together in an ancient manor house in modern day Britain. When three humans break in to the spooky mansion to try and save their friend who has been kidnapped by these neck-biting vampires they discover a terrifying world unlike anything they’ve ever seen before: 100 year old caged humans locked in underground dungeons; vicious werewolves roaming the corridors; and spine chilling seances unearthing spirits from the dead. But when the tables are turned and our vampires are lured out of the home, will the modern day be ready for what is about to be unleashed? Or is there another plot at play? And what has love really got to do with it? 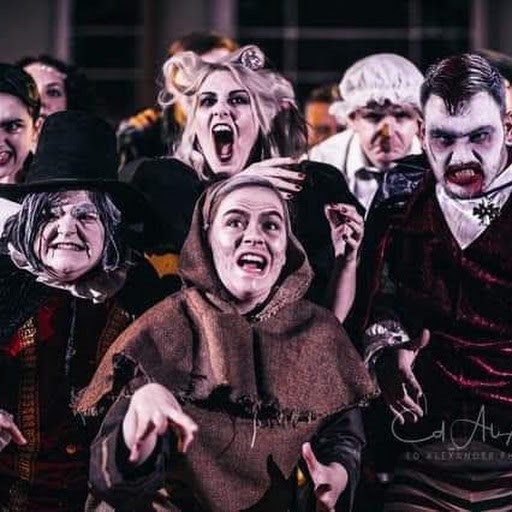 These and many other questions were answered in a great evening’s entertainment that offered the perfect escapism from the daily grind. All the cast performed well and each one deserves a namecheck accordingly:

I was impressed with the way each one was fully immersed in their character as well as those who played multiple roles with ease. We were presented with some wonderful choreography which showed just how much work had gone into putting this together and combined with some slapstick routines and perfect comic timing we were served up with a real treat: when the audience are joining in and clapping along you know you are onto a winner.

Special mention must be made for the delightful costumes as each and everyone really got into their roles – and in some instance’s necks – and the clever and discreet use of props which kept the performances forward and centre stage. That said, I’ll never look at a garlic bread the same!

What was also great to see was a community coming together to support local people putting on a show just for them which reminded me of the original roots of theatre: sometimes the best thing is to go back to basics, and we were certainly served up a treat tonight.

Theatre On Foot has been running high quality, low pressure acting classes for children for some time now with the emphasis on having fun, and the opportunity to take part in interesting, modern original shows with full sets, props and costumes.

This year is the first time an adult group has been introduced into the mix following a similar formula to the children with a lot of game playing, work shopping basic skills and bonding, and then 'auditions' for the show itself. Although tonight’s performance was a one-off (and sold out) there is an adapted performance by the children next Saturday 14th December at 7.30pm at St Bride’s Church. https://www.theatreonfoot.co.uk/

St Bride’s is a creative, progressive, inclusive Anglican church in the heart of Liverpool’s Georgian Quarter, Further details can be found at http://stbridesliverpool.org.uk

This was a thoroughly enjoyable evening with a brilliant cast and skilled production team, and I look forward to seeing future shows.