Sombre, written and directed by Melissa Hale, is a story of war: literal and figurative, big and small, explosively violent and psychologically tormenting. Hale, together with Assistant Director, Megan Ryder-Maki and Choreographer, Cameron Dobson, has created a painfully brutal piece of theatre which will leave you stunned, and quite possibly close to tears.

The actors begin in place, on a filthy sand covered stage, strewn with plastic bottles of water, playing cards and letters from home. Relaxed and chatting with each other, games are played, naps are taken and the strength of the bonds in the platoon is made fully apparent before the lights even go down.

The play opens with a strong display of physical theatre, excellently choreographed movements combining elements of sheer panic and manoeuvres associated with the military. The blend of the fear and desperation with the disciplined stoicism rounds out the characters in an interesting and original way and helps you identify with the story from the outset. Physical theatre elements throughout the play have the result of making the intimate setting of the Hope Street Theatre feel much larger than it actually is. 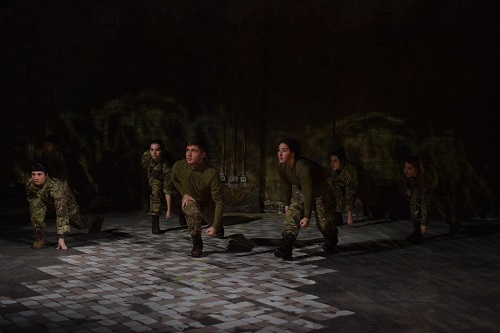 This adds a sense of realism to the war torn setting and heightens the sense of fear and anxiety the soldiers are feeling.

While the injured soldiers are being treat by their platoon’s medic, Gareth (Cameron Dobson), Nathan (Euan Livingstone) begins to taunt him with a photograph he has found of Gareth with another man. This leads to Jason (George Barrs) beating Gareth up while the other soldiers jeer and refuse to allow Gareth to treat them.

While Nathan is very much the ringleader of the homophobic abuse Gareth endures, the remainder of the platoon go along with it enthusiastically which creates a viciously, vitriolic atmosphere. Shocking language and violence create painfully mesmerising drama as we are drawn deeper into Gareth and Nathan’s world.

Livingstone’s stage presence is phenomenal and his emotional portrayal as the bullying but despondent Nathan is a sight to behold. His raw and violent portrayal is breath-taking in its poignancy and it is clear that this young man has a very bright future ahead of him.

Dobson’s performance is excellent and his quiet simplicity works well against the heightened emotions shown by Livingstone. Vivid and authentic feeling mean that his characterisation is painfully real and you feel each stage of his harrowing journey.

Overall, the cast perform very well and work together brilliantly as a team. Dialogue is used often as background noise, but there are a couple of occasions where this technique is used on more important lines and as a result these are lost. Some consideration needs to be given to articulation and projection in future performances.

A delightfully fresh piece of theatre, Sombre draws you into its dusty world and pushes you to breaking point with its brutally honest look at the dark world of war and the darker world of homophobia and discrimination.

Sombre is being performed again at the Hope Street Theatre on 1st February 2020. Tickets are available here