Local theatre collective 20 Stories High based in Toxteth, make creative collaborative performance with culturally diverse young people and emerging artists. They offer a platform and a much needed voice to young creatives to explore issues that affect their daily lives and society as a whole. Through spoken word, music and movement and design they explore the things that really matter in the community around them.

It would be so easy to say that 20 Stories High were simply just a theatre company who wanted to deliver a meaningful message about the state of society as a whole but that would just be scratching the surface – 20 Stories High is far more than that.

In this new play written and directed by Nathan Powell we are taken into the world of three young aspiring footballers and their dreams of going forward into the premier league. The three footballers, Kyle (Tristan Waterson), Liam (Keith Rice) and Hakeem (Malachi Pullar-Latchman) feel left on the side-lines within their football academy and they all desperately want to establish careers in major league football. Life and injury and de-selection loom over each of the characters and always there are the countless unforeseen factors that hinder their individual progress.

It is a play about ambition, about personal growth, about how you cope and fit in, it’s also about family and friendship and how important it is to really look after each other within a system that is set to fail so many.

Powell’s intelligent and sharp script covers many issues from racism and diversity within the football system to self- esteem and the pressure to succeed. All three actors brilliantly convey the highs and lows that each character goes through during the course of this vastly energetic and entertaining piece of theatre.

Without any doubt this is an extremely well-acted piece – thoughtful, sensitive, yet at the same time quite powerful. The audience were totally captivated throughout the performance and Waterson, Rice and Pullar-Latchman knocked it to the back of the net, all three displaying enormous physical and emotional strength that was truly outstanding. Special mentions go out to Conrad Kira for a fierce musical landscape that really did provide extra depth and significant meaning to the performance and also to Rachael Nanyonjo who expertly directed all the on-stage movement.

This is a raw, dynamic and exciting piece of relevant theatre that has a real beating heart and a lot to say about how we live today. Catch this little gem of a play if you get a chance, you won’t be disappointed. 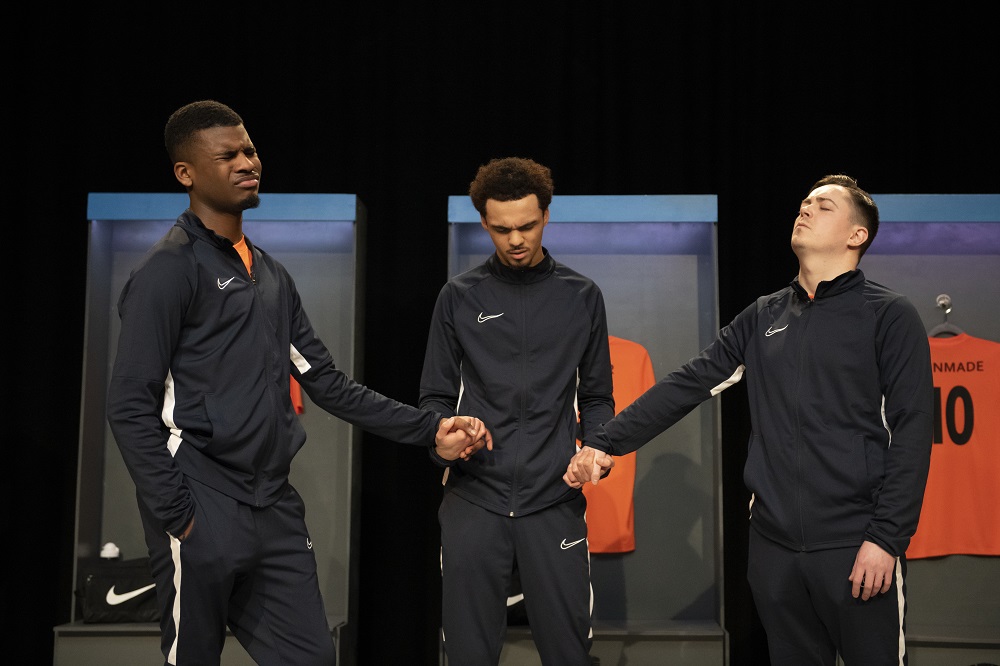