There’s a Dead Body in my Baby’s Sandpit is an R&D project devised by Falling Doors Theatre and directed by Sarah Van Parys. A dystopian black comedy, this unique play turns theatre and the world on its head to create a highly original piece of drama.

The play opens in an idyllic, suburban setting, with a white picket fence and patches of bright green grass surrounding the eponymous sandpit and pristine furniture. Cheerful bunting and balloons surround the windows hanging from the ceiling.

This pretty, 1950s world is inhabited by Linda (Shawney Ross) and Brian (Elliot Burton) and their baby daughter Nelly, who have just moved into the community. They are quickly welcomed by their new neighbours Glenn (Catherine Devine) and Phillip (Michael Schenck) who are pillars of the community, as well as Glenn’s assistant, Lesley (Natasha Hale) and all-round handyman, Ian (Conor Burns). 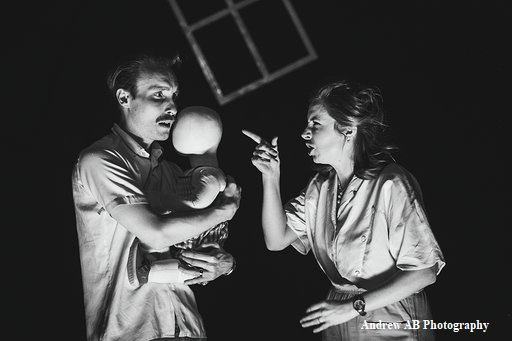 The community has a number of strict rules and compulsory neighbourhood watch meetings, and it isn’t long before Linda and Brian are suspicious about the world they have moved into. But despite this, nothing can prepare them for little Nelly digging up the dead man beneath the sand in the garden.

Details are added to the story in the form of short, standalone monologues which flesh out the show in a delicate and original way and it quickly becomes clear that nothing is quite as it seems, though nothing can prepare you for how this play actually ends.

Lighting is cleverly used throughout the show to create both a sense of nostalgia and add atmosphere to the horrific situation the community finds itself in.

The piece has plenty of laugh out loud moments throughout, using a combination of subtle comedy, innuendo and wicked black humour. The comedy partnership between Devine and Schenck is fantastic. Both characters have a high level of neuroticism and their obsessive nature borders on frightening from the very beginning of the play.

The comedy in the play is cleverly balanced with some excellent dramatic tension as Linda and Brian become more and more distressed by the dreadfulness surrounding them. Ross and Burton play off very well against each other and the chemistry between the two is excellent. Burns and Hale also work very well as a partnership and deserve praise for their performances.

There’s a Dead Body is my Baby’s Sandpit is a surreal play which deals with grief, loss and depression in a unique way that shows you no matter how deep you bury things, they can always resurface.

There’s a Dead Body in my Baby’s Sandpit is showing at the Hope Street Theatre until 29th February. Tickets are available here https://tinyurl.com/qor8qfg