A Journeywoman’s Tale, performed by mezzo-soprano, Jennifer Johnston, accompanied by pianist, Joseph Middleton, is a musical exploration of home, travel and homesickness. Performed in the beautiful St George’s Hall Concert Room, the themes are particularly relevant to Liverpool, a port city whose society is built on a foundation of migration.

Johnston’s powerful soprano tones are beautifully complemented by Middleton’s piano, as the rise and fall of emotions associated with the themes of the evening are explored. The first half of the concert is comprised of songs in English, while the second half has a very different tone with songs sung in German.

The opening song, Michael Head’s Sweet Chance that led my steps abroad is filled with a sense of longing. This is an emotion which is explored repeatedly throughout the evening. Ivor Gurney’s In Flanders has a more determined tone, but is again a tale of longing for the home of the composer’s childhood. The passion felt in John Ireland’s Earth’s Call is illustrated by a powerful vocal performance surrounded by magnificently intricate piano, which produces a beautiful pastoral image. This contrasts with the haunting and ominous O Waly, Waly by Benjamin Britten, which takes the pretty tranquillity of the countryside and gives it a darker edge. Peter Warlock’s My Own Country has a more hopeful tone leading us into the energetic and fun Calypso by W H Auden complete with ear-piercing whistle. 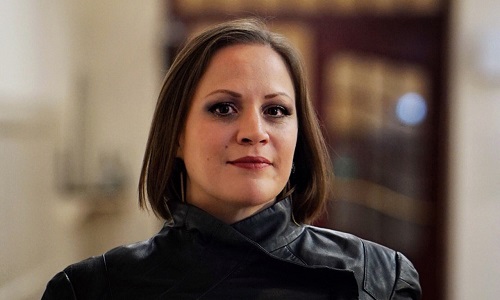 The first set is followed by Ralph Vaughan Williams’ Songs of Travel. The determined footsteps illustrated by piano in The Vagabond take us on the road from the beginning of the set. The reverent tones of Let Beauty Awake are impressive which leads us into the story of Roadside Fire. The reflective and hopeful Youth and Love is followed by the poignant In Dreams with its darker, ominous edge. The mournful The Infinite Shining Heavens is supported by particularly good emotion from Johnston. She then shows fatigue and yearning in Whither Must I Wander, the loneliness caused by missing home fully apparent, before moving onto the reverent Bright is the Ring of Words. The set closes with the powerful and nostalgic I have trod the upward and downward slope, leading us full circle in this story of a journey.

The second half of the concert opens with a set from Goethe-Lieder by Hugo Wolf. These songs tell story of the troubled Mignon opening with the desperate Kennst du das Land where Mignon longs for her blissful childhood in Italy. Her desperation continues in Heiß mich nicht reden where she intensely begs for solitude. Johnston’s performance is particularly strong in this set, as she clings to the piano as if entirely overwhelmed. The haunting and angry Nur wer die Sehnsucht kennt explores isolation further while the resigned and accepting So laßt mich scheinen is an emotional climax to the set.

This is followed by Robert Schumann’s Gedichte der Königin Maria Stuart, based on translations of texts allegedly written by Mary Queen of Scots, and presenting her in a very favourable light. Abschied von Frankreich is a determined devotion to France which is followed by the devoted prayer Nach der Geburt ihres Sohnes. Johnston’s gestures and body language during the mock admiration of An die Königin Elisabeth show that this is truly a multi-faceted performance and not just a cycle of songs linked by theme. The regretful and nostalgic Abschied von der Welt bring down the emotion through some excellent facial expression before the desperate and angry Gabet majestically closes the set.

The evening closed with a hopeful and beautiful performance of I Wonder as I Wander which brought a sense of completeness to a truly remarkable evening of music dedicated to journeys and yearning for home.