The Mourning Bride is a modern, Liverpool based retelling of Christopher Marlowe’s Edward II, adapted by Marjorie H Morgan. The all-female cast is directed by Zara Marie Brown, assisted by Charlie Collinson, in this interesting drama about love and jealousy.

Eddie’s opening monologue is very strong and shows who she is as a character from the outset. There is some nudging towards the contemporary political landscape and the role of money for someone who has plenty is explored. We learn that Eddie is married to Bella but in love with Gumar who has now returned to Liverpool following the death of Eddie’s father, Edward. Eddie is now in charge of her family’s company and Gumar is determined that now everyone will do as they are told and her and Eddie can be together. But the company is under threat of a buy-out and Morgan and Bella are adamant that they won’t let that happen and they will do anything to stop it. 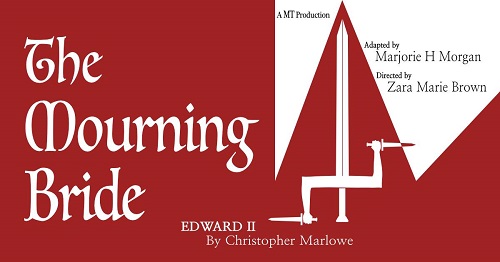 Monologues are a theme which run throughout the piece and give us the backstory of each character. This technique keeps the hour long play relatively short by telling us who each of the characters are rather than showing us through dramatic exposition. This play was previously performed at much shorter length and this is the extended version, but if the play were to be extended again to a full-length piece, the themes in these monologues could be explored in further detail.

Despite Nkondock’s monologue telling us that she is very much in love with Eddie, her character often feels very shallow with numerous elements of the gold-digger stereotype. This can make it difficult to sympathise with her as a character and feel that the people around Eddie warning her to be careful are in the right. This means that the play has many shades of grey rather than the plot being based around cut and dry issues.

Being a modern-piece this does not use Marlowe’s original language, but the complexities of the plot do mean that the dialogue is of paramount importance. Because of this, future performances will need to take into account enunciation and volume when delivering lines to prevent important information being lost.

Bradley plays the part of the awkward and put upon PA very well with her emotional expression being particularly strong. McLaughlin also shows some very strong emotion in a passionate and believable performance.

The close of the play does lose pace somewhat as all of the loose ends are tied up. This is a feature shared with Marlowe’s original script which also fades off towards the end. Leaving things more open would increase the drama and shock of the piece and prevent the wonderful performances immediately prior losing their dramatic impact.

The Mourning Bride is being performed again at the Hope Street Theatre on 10th March 2020. Tickets are available here https://tinyurl.com/wwdfwjf