To Have to Shoot Irishmen - Omnibus Theatre, London

At the start of its UK tour, new play ‘To Have to Shoot Irishmen’ premiers at The Omnibus Theatre this October. Scheduled as part of its Irish Theatre season, the plot is set in Dublin 1916 amidst the chaos of the Easter Uprising. Written by award winning playwright Lizzie Nunnery, the show is a fusion of drama, storytelling and Irish folk songs.

At the start of the play all characters disperse through the space and stand to attention. Anxiously, they stare into the distance observing the horrors of what has happened. A rebellion to proclaim an Irish Republic has been crushed by the British Army. The city is a wreckage and filled with casualties. Suddenly, Hanna, played by Elinor Lawless, passionately narrates her desperate search for her husband amongst the ruins. With skill, Lawless beautifully describes her pain and confusion at his disappearance. Her performance is emotionally fuelled and incredibly moving. Effortlessly Lawless shifts into song, her soprano voice lamenting her heart ache. Throughout the piece the company sing together exploring troubled themes during transitions and moments of stillness. Accompaniment with folk instruments is effective and incredibly atmospheric. The songs form the heartbeat of the production and are always well timed and beautifully harmonised. 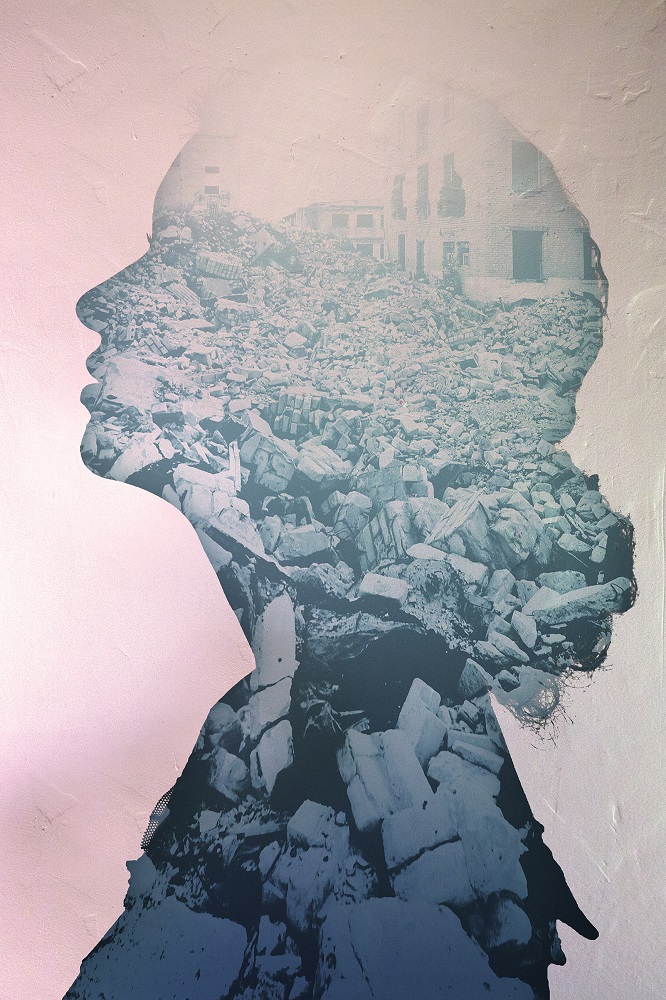 The story centres around two interspersed conversations. A captive republican whose guarded by an Irish soldier in the British Army and a British Army Officer breaking bad news to courageous Irish feminist, Hanna. Officer Vane, perfectly cast as Russell Richardson, arrives to confess of a corrupted key officer in the British army. Keen to state his disapproval, Richardson endeavours to reach Hanna and ensure she understands he has nothing to do with the crimes. Lawless as Hanna contends with him and confronts his hypocrisy. Nunnery has created a fascinating situation with a meeting of two characters who both claim to be Irish and know what’s best for the country, though Vane presents himself with a finely clipped British accent. 18 years old recruit William, beautifully played by Robbie O’Neill strives to hold firm to his convictions whilst Republican Frank, performed by charming Gerard Kearns, tests his loyalties to the British Army. Narrating a horrific story of young boy being shot for cursing the army, O’Neil squirms at the image and fervently denies the situation. As the story progresses, a mutual trust evolves, with O’Neil largely letting his guard down, making the ending of their relationship particularly shocking.

Graduate set designer Rachael Rooney is responsible for the aesthetically pleasing but entirely impractical set design. A collection of upturned furniture, some precariously balanced, fills the entire stage right, while a metal structure frames the outside of the stage. The chaos accurately represents a derelict and shattered home and city but has no function in the production and largely restricts movements for actors. The only interaction performers have with the set is tripping up on the paper carelessly scattered on the floor. At times the elevated piano is played as a live accompaniment but as the characters have no personal relationship with it in the storyline, it is peculiar to have it as focal point.

As no clear structure or door represents the prison cell, director Gemma Kerr is forced to use blocking to represent where the enclosed space and entrance to it is. Unfortunately, the staging and eye lines are incredibly inconsistent and therefore confusing. Though clever audio design by Vidar Norheim helps bring the prison to life, the dimensions of the cell regularly change. A shortcoming easily resolved by some stage light plotting. Further, during powerful moments of storytelling, particularly Hanna’s opening refrain, Kerr ruins the stillness by getting actors move across the set. Frequently, characters are directed to hit the piano strings with a percussion stick. This creates no atmospheric sound and is instead incredibly distracting in the piece.

An absorbing story exploring key matters of identify, justice and freedom for Ireland. Excellently performed by the entire cast but largely let down by staging and direction. Overall, Elinor Lawless clearly stole the show.