For the first time in its 177-year history, The London Library hosts a full-scale stage production that is open to non-members. After the recent discovery that Bram Stoker did the majority of research for his most legendary novel there, Creation Theatre brings their production of Dracula to the reading room.

Directed by Helen Tennison, the site-specific production is fantastically eerie, capturing the tensions of the original novel brilliantly. With just two cast members, Bart Lambert and Sophie Greenham, the play explores the story in a more disjointed way, with a continuum of flashbacks and character changes. The stunning usage of audio-visual design by Eva Auster is key to this production, creating a spine-tingling and terrifically unnerving atmosphere throughout.

Kate Kerrow’s adaptation takes the narrative forward to the 1950s, seemingly making the emotional and social restrictions upon the characters more intense. Mina clearly battles with the restrictions of traditional femininity and the limitations on her as an intelligent woman. 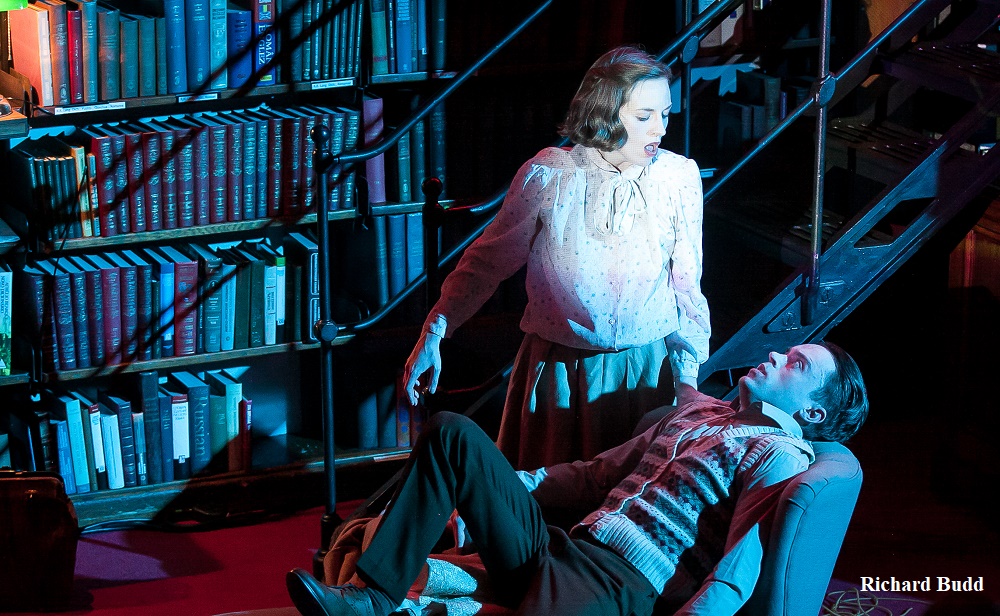 The arguable protagonist of this production works with technology and her intelligence to piece together the story, before the sense of uncleanliness and darkness takes over. Yet, this adaptation does assume some prior knowledge of the novel and the disjointed narrative, plot and characters may be a little less relevant and clear to those without context.

Greenham’s commitment to character is admirable, overwhelmingly embodying each new role she takes, mastering both physicality and emotion. Her portrayal of Mina is complex, exploring each layer of the character with subtle nuances of performance demonstrating the woman’s sexuality, mischievousness and sensibility.

Lambert’s physicality is immense. His moments of terror and loss of control to Dracula are superbly uncomfortable. As well as his fantastic use of his body in highlighting character, Lambert’s talent is also found in his skill of voice. His creation of distinctive accents and emotions enables clarity in the narrative.

As well as the brilliance of individual conviction in this production, importance is in the chemistry between Greenham and Lambert. Their fantastic partnership in performance captures the animalisation and control of Dracula. Worked with lighting and sound, their synchronisation creates a real sense of fear.

The reading room’s vast collection of books creates the perfect backdrop for projection. The audio-visual design facilitates the consistent sense of dread and looming presence of Dracula, despite him never appearing physically. Ingeniously, projections against window blinds at the side of the room and the utilisation of the window itself, makes sitting in the audience more unnerving, as we feel at threat to the villain also.

The clever staging, design and utilisation of technology in this adaptation captures the omnipresent threat of Dracula. Unlike the novel, we never meet the count, yet we also never see the end of him. This fantastically unnerving and intense production fearfully reminds us that darkness has a presence within us all.