On 7th July 2005, 47 minutes of carnage swept across London. ‘Outright Terror… Bold and Brilliant’, the title of Peter Neathey’s (Writer/Director) play is taken from the much-photographed tag on the side of the number 30 bus as it sat twisted and mangled in Tavistock Square on that day. A prophetic symbol of everything the attacks stood for, and a sign that the four murderous bombs were a milestone that changed everything in the Nation’s Capital city.

14 years later, ‘Outright Terror…’ asks the audience to critically evaluate the facts surrounding the inquiry into the events of 7/7. As the audience is invited into the auditorium (or courtroom) there are media images projected onto a large screen. A Court Usher welcomes in the audience (the jury) in and asks them to take their seats. Bloody newsreel images and photos of the alleged bombers are displayed in front of them. Flashes of conspiracy theory are also woven amongst the images along with CCTV images of the four bombers that have been seen time and again on popular news channels. 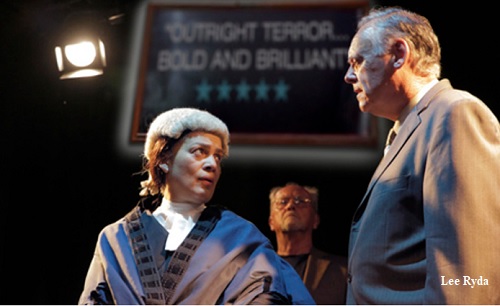 As members of the jury the play is fully immersive, and the audience is part of the story. The play is introduced by the actor playing the Court Usher (name unknown) and the audience is notified that the court will be asking them to consider if a proper inquiry was indeed conducted; if all the evidence was considered, and to consider if the four men (and their families) posthumously accused of the bombings were afforded a fair and due process; an important role in bringing the play to its conclusion.

This is a multi-media courtroom drama that focuses on the cross examination of Lord Ian Blair by 7/7 Advocate Bob Bernstein (Neathey). The play dances around with a combination of multi-media input: film clips; facts and reconstructions along with detailed script mostly delivered by Neathey. The overall story outlines a series of alternative facts and theory or “evidence” that the audience is encouraged to believe occurred on that day.

On one hand, this is an incredibly unusual and clever way of presenting a narrative about the events of 7/7 with some fair performances by a large cast of nine Actors. However, the script is also highly politically charged with a script loaded with claims of institutional racism; high level criticism of National security and conspiracy theory. It is hard for the audience to separate entertainment with lecture and whilst quirky, it is hard to understand the overall motives behind the script.

The Writer has clearly formed strong opinions on the events of 7/7 and presents these in a slightly one-sided manner. At the end of the play the jury are (by show of hands) asked to make a judgement on the quality of the investigation carried out following the attacks. With the subjective way the script is presented it is likely that this would be the same outcome every performance. That said, it’s certainly gripping for the audience and undeniably entertaining to be part of the plot line, so this is one that is recommended for future audiences as there is nothing similar out there at present and guaranteed to generate further discussion.