I hate going to a party where everyone knows everyone and I don’t know anyone and I’m clinging to the wall like paint. And then everyone roars with laughter at some inside joke, and I’m there waiting, wanting to understand what it’s all about. So that was me at ‘The Twilight Zone’.

Now, don’t get me wrong I’ve heard of this TV show before, but first being aired in the 50s and 60s meant it was before my time. The revival of the 80s, somehow also passed me by, but still I knew, or so I thought, kind of what ‘The Twilight Zone’ would be. 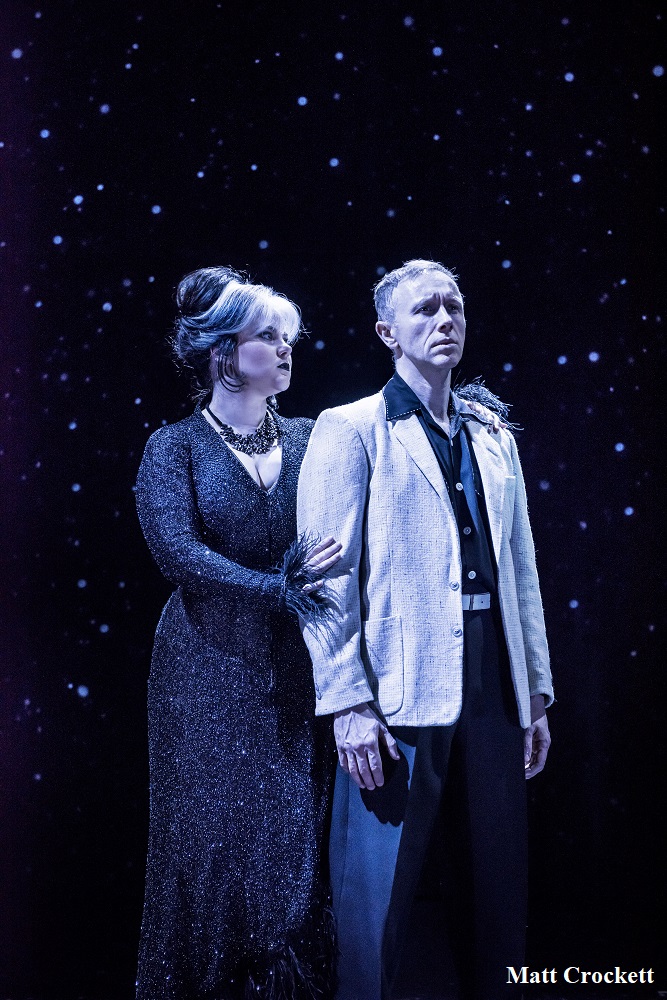 Set firmly in the 60s and based on stories by Rod Serling, Charles Beaumont and Richard Matheson, the issues feel reminiscent of their day when space exploration and UFOs were the frenzied zeitgeist of America. Aliens were three-a-penny and unexplained stuff was the order of the day, although somehow it felt it was a part of this day, and socially relevant and big.

The stories are presented in a series of short episodes with unfathomable and weird things happening – and I’m sure (if I’d seen the original TV programme and going by the laughs of the other audience members) some cool cultural references which zoomed over my head.

Despite feeling out of the loop, you do get a sense of watching something that is very different – like a cult classic B movie, but it’s on the stage. The set and costume design (Paul Steinburg and Nicky Gillibrand) evokes a real period feel of the 60s – as though the characters have been transplanted into the set right in front of you.

Trying to please original fans of the show and drawing in new audiences is always a precarious balancing act. Anne Washburn’s adaptation feels loyal to the roots of the show and as a newcomer to the franchise I can’t help feeling prior knowledge is a prerequisite to get the most out of the production. However, despite feeling on the outside, I want to get inside and so I’m now going to track down some original episodes of the ‘The Twilight Zone’. I may not have fully understood the play, but it left me wanting to.