Libby (Neve McIntosh) is a middle aged, failed playwright on the precipice of suicide. Declan (Lorn Macdonald) is an impoverished teenager who has nothing much to offer the world aside from his love for his little Sister and some skilled artwork. On the edge of Edinburgh’s Salisbury Crags one night, Libby takes a step forward into the darkness only to be pulled back by Declan and their two lives are changed forever.

Kieran Hurley’s Mouthpiece is a powerful and provocative, Pygmalion style narrative that gives voice to two different sides of the same city and two very different cultures. Set against Kai Fischer’s multi-tiered; black and white stage and Kim Moore’s compelling but simple sound design, Mouthpiece epically represents the sides of a conflicting society. As the lives of the two characters intertwine and become co-dependent, one of them spots an opportunity to pull themselves back from the brink… But at what cost to the other? 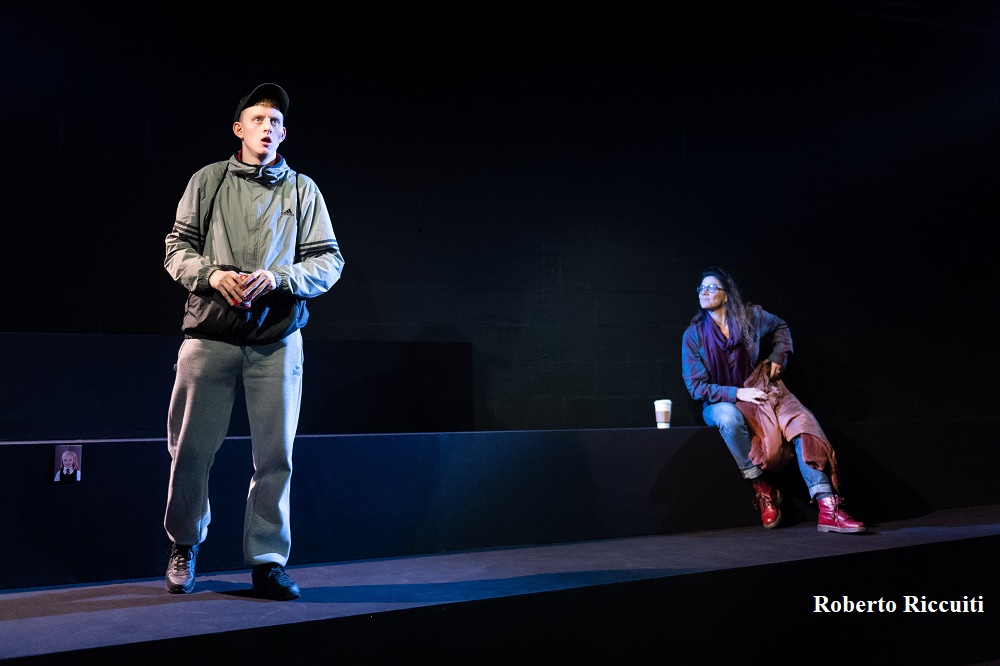 Macdonald’s performance as Declan is a tour de force, he expertly navigates the black comedy dialogue to provide the audience with a compelling and breath-taking representation of a young man that has been neglected and forgotten by the society he lives in. Completely believable and honest, it’s impossible to take your eyes off him as he storms the stage as Declan. Equally compelling is the more controlled performance given by McIntosh. Libby is more precise and more thought out, but just as vulnerable as Declan; and McIntosh does this with a grace and style that perfectly complements Macdonald. Both characters are complex and yet both actors expertly portray their identities, a perfect partnership on stage and pure joy to observe.

In every way Mouthpiece is world-class theatre, a play that lays bare the concept of cultural appropriation through art and theatre and makes every audience member question life; ethics, and where they fit in. After all, is it right to enjoy art when it is based on other’s misfortune? With a catastrophic ending leaves the audience holding their breath and gagging to give a standing ovation, this is one that shouldn’t be missed.

Mouthpiece is presented by Traverse Theatre and continues at Soho Theatre until Saturday 4th May 2019 https://sohotheatre.com/shows/mouthpiece