Hedgehog - The Lion and Unicorn

Written by Alexander Knott, Hedgehog tells the story of Manda, a 1990s teenager on the verge of her journey into adulthood. Manda has all the anxiety of youth, and none of the experience of adulthood at her fingertips and we follow her through a time of exploration and experimentation.

Hedgehog is a very low budget piece of experimental, physical theatre with minimal set, costumes and cheap projections onto the back wall. It’s the kind of theatre you see A-Level students produce in their final year at college. It’s unclear if that is the intention given the narrative of the piece, but it makes it hard to watch and take seriously even for London fringe theatre. 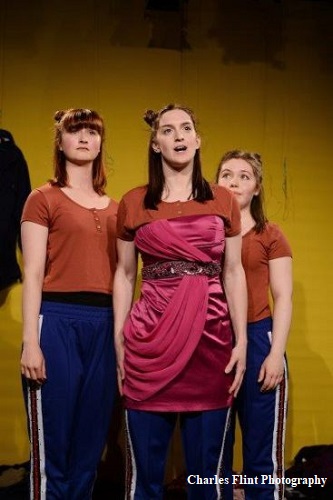 The piece is essentially a monologue, supported by two others (Emily Costello and Lucy Annable) who jump in and out of other characters. There is a jumble of dance and movement that supports the script, most of which seems unnecessary and doesn’t add to the narrative at all and distracts from the plot line. It is genuinely easy to get confused by what is happening on stage and at times (especially because of some low budget time travel) the plot completely disappears.

The script certainly has moments of promise. There is something quite clever about the telling of Manda’s story. It’s a comedy with lots of laughs from the audience, and there is also a very delicate and touching representation of a young woman’s mental health and anxiety issues. But generally, the story is confusing and hard to follow.

By far the saving grace of this piece is the actress playing Manda (Zoe Grain). She is a feisty young performer who brings buckets of energy and enthusiasm to the role and works hard to bring the character to life. Grain has developed a comic timing that is perfect for Manda but is also able to switch up the tone when needed to show her vulnerable side. A potential star in the making.

The supporting performers are also visually very exciting, with slap stick timing and amazing facial expressions, they can project the characters they play out into the auditorium even when they have no dialogue.

Hedgehog is clearly trying to be an intelligent production and maybe with time and money it may develop as such. But for now, it is at best 70 minutes of light entertainment that will make you giggle tonight but will have forgotten tomorrow.

Hedgehog is at The Lion and Unicorn until the 22nd June 2019.