It scarcely seems possible that is five years since the Riverside Studios closed for rebuilding. It is now reopened after demolition of the old building and enlargement by taking on an adjacent site.   The new complex has large curved windows overlooking the river and Hammersmith Bridge and a large spacious interior with bar and coffee shop. With a new walkway along the river it is a splendid addition to the West London river frontage.

For their first theatrical performance in one of the theatre studios they chose not a major crowd puller but the dramatisation of two poems by Christopher Reid performed by Robert Bathurst and Rebecca Johnson.   The first piece The Scattering tells of the author’s experience during and following the death of his wife. The first scene is set on the island of Crete when she knows she is dying but still revels in all that life has to offer. It then follows her demise and Christopher’s journey to come to terms with her death.   A subject which is potentially depressing is so beautifully written, observed and performed that it was tender, moving and uplifting with moments of humour. The second piece The Song of Love tells of a lunchtime encounter with an old flame; anxiously awaited, nervously encountered and in the end unexpectedly concluded. 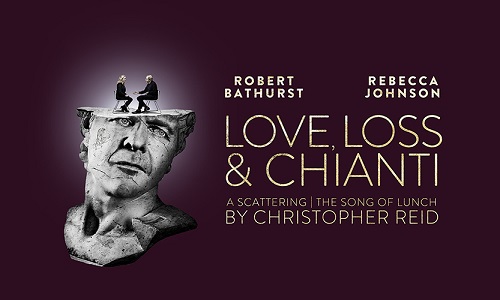 Both pieces are simply staged on a large acting area with the minimum of furniture: a couple of chairs and a few boxes. But this is all that is needed for the impact of this evening is in the quality of the writing which is exceptional. It is seldom in modern writing to hear such beautiful prose and expressive use of language.   Bathurst who has had a long fascination with these works by Reid and helped adapt them for the stage delivers the language perfectly.   His performance in The Scattering is restrained and believable but it is in the second piece where he has the opportunity to demonstrate his virtuosity and brings out the full humour of the situation. In both pieces he is ably supported by Rebecca Johnson as the wife and the ex-lover whose expressions and movement around the stage were a joy to watch.

Behind the actors on the rear wall were projected a series of largely monochrome animations by Charles Peattie, funded by the Arts Council, which illustrated the narrative in both stories.   Initially I was concerned that this would distract from the actors but like everything else in this superb production they were very well judged and added to the sense of atmosphere which was conjured.   Cleverly inserted sound effects, popping of corks and clinking of glasses, also added to the effect.   Jason Morrell’s direction was deft and subtle. His choice in the restaurant scene to have the two chairs far apart was not one which many directors would have made but it enabled the actors to make full use of the playing space. My only slight criticism was that there was, perhaps, a little too much movement on occasions; frankly the quality of this writing is so high that the actors could have stood still for the entire 50 minutes of each piece and it would still have been an enthralling evening.

If you want to hear English poetry beautifully written and performed, I cannot too highly recommend a trip to this production at the Riverside Studios. https://www.riversidestudios.co.uk/book/love-loss-chianti