The Globe Theatre was erected in 1599 by The Lord Chamberlain’s Men in Shoreditch and Hamlet was performed during a repertory Summer season at the theatre between 1600-1601.  It is only fitting that one of Shakespeare’s most performed plays leads this season of live streaming.

The Globe’s stage is an enveloping space, wrapping the audience and performers in its theatrical embrace.  Hamlet is a play of many sentiments and draws the audience in with its emotional soliloquies.  The performers and directors worked together as an Ensemble to bring together two plays, Hamlet and As You Like It during the 2018 season and we are now offered a chance to see Hamlet at home.  The Globe are also offering five other plays over the next few months: Romeo and Juliet, A Midsummer Night’s Dream, The Two Noble Kinsmen, The Winter’s Tale and The Merry Wives of Windsor. 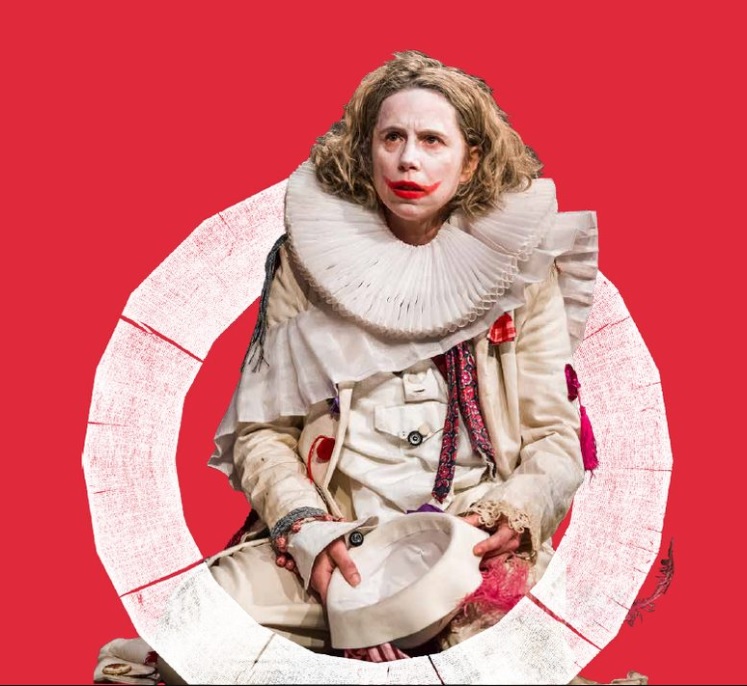 Hamlet (Michelle Terry) begins as he returns home to Denmark, having been summoned by his Gertrude (Helen Schlesinger) has married his uncle, Claudius (James Garnon), who is now King of Denmark, and the celebration of their wedding is taking place.  Hamlet is distraught at his father’s death, so when Horatio (Catrin Aaron) sees his distress, he encourages Hamlet to visit the ‘watch’ (Marcellus and Barnardo).  Hamlet then sees the ghost of his father who informs him that he was murdered by Claudius.

The staging has been kept simple, as it would have been when the play was originally performed in the early 1600’s.   The costumes are partly contemporary, mixed with modern day dress and at times, the costumes helped to communicate Hamlet’s grief but also his slide into madness with the clown costume.

Act one, was performed in the evening’s natural light, which somehow made the stage seem much larger; the shadowing at the back of the stage, did not help the performers, who seemed almost lost in the large space.  As the play went on, the darkness fell, and the contrasting lighting certainly helped us see all aspects of the stage and the latter Act’s of the play benefitted from the larger ensemble scenes.  Obviously, this is from the viewpoint of watching it on a television at home, rather than being a spectator at ‘The Globe’ itself.

The gender swapping is obviously not a new thing and has been done many times within Shakespearean plays.  Michelle Terry was a very strong Hamlet and Bettrys Jones carried off the role of Laertes equally well, and it almost felt that Claudius was underplayed as his manipulative nature struggled to come through.  Ophelia was a challenge for Shubham Saraf as we are expecting a very feminine dainty lady, so a male in the role could be unconvincing, but I am pleased to say Saraf, had me convinced!   Some of the comedy felt a little overplayed, which took away some of the dramatic tension, but overall, a very enjoyable evening spent reminiscing upon many a happy time spent at this theatre.

To watch this series of plays you can go to The Globe’s website https://www.shakespearesglobe.com/watch/ where there is also a link for donations.  We must remember that our theatres will only survive if we help to support them.