I am a great supporter of reinterpretation to help open up great works to a modern and younger audience, but one needs to tread with caution when it involves probably the most famous love story of all time. Sadly, the RSC under the direction of Erica Whyman stampeded all over this production from 2018.

The play opens with a gang scene and all the young leads speaking single lines, building to an overlapping frenzy that captures the intensity of a hot Italian summer before returning to a single voice with our Montagues and Capulets emerging to battle lines drawn. So good so far, but as the play progresses, the insistence on a gang-style patois puts paid to the intended rhythm of the language making it difficult to follow as the poetry was lost, and combined with some performances that frankly resembled a first-time script readthrough, there was too often a lack of comprehension of mood and moment in some very mixed casting. It’s not all downhill but bearing in mind this play has been successfully reinterpreted on the screen then this felt like a missed opportunity for RSC. 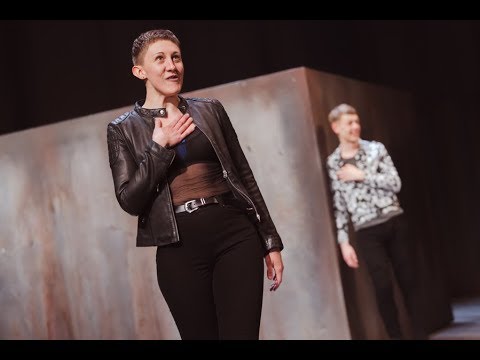 I often struggle with the character of Romeo and let’s be honest, if you look at him critically there’s not a lot to like, but Bally Gill, possibly because of this interpretation, was able to bring some charisma to a part that is often a wet lettuce. He was cocky and self-assured yet vulnerable when it mattered in a most believable fashion that had me wondering about a different conclusion when he re-appears towards the end.

Karen Fishwick as Juliet was a proper feisty little madam and made me question whether perhaps Juliet of her day may have been similar in mood rather than the pliable young girl we often see portrayed. In an expressive performance you could feel her emotional torment at each turn although the vital chemistry between her and Gill was lacking.

Andrew French’s Friar Lawrence was gentle and composed whilst Ishia Bennison’s nurse was crude and cunning in equal measure and her scenes with Fishwick played out well. I particularly enjoyed Michael Hodgson’s Capulet as he caught the two sides of the character perfectly as the gentle, sociable diplomat on the one hand and an extreme sociopath on the other. Raphael Sowole’s Tybalt provided some malice but lacked the cat’s finesse.

There were some gender changes in casting although it was unclear why. Whilst Beth Cordingly provided an assured Escalus, there was unfortunately a distinct lack of purpose in Charlotte Josephine’s Mercutio, as one of the most smart, sophisticated, and sarcastic characters in theatre history was undone not by his hot-headedness but by being turned into little more than a yobbo: whether it was Whyman or Josephine, or a combination of the two, this Mercutio should never have seen the light of day.

I would recommend this production to theatre practitioners for one thing: the staging. Less is often more and here was a clear example of how, with the use only of a revolving cube allowing each and every scene to be imagined and believed. People often balk at the potential cost of larger productions yet here designer Tom Piper and lighting designer Charles Balfour demonstrate how with a little inspiration the action can be allowed to speak for itself.

Sadly, the action in this production was full of energy but little meaning. Many a Shakespeare play has been successfully interpreted but on this occasion, it was a step too far which, for a company of this standing, is an absolute tragedy. https://www.rsc.org.uk/