Occasionally you go and see shows which make you want to really cry out in pain. This was the first time I actually did. To be fair this was, believe it or not, the first time a performer has ever asked me to hammer a nail into their heart. I cried out in pain because I missed the nail and hit my own thumb thus spending the rest of the performance sucking said thumb. It was only after my embarrassing faux pas that it dawned on me that he meant the wooden board with a painted heart upon it that he held up rather than his own actual heart. Perhaps I’m too stupid to write a review of a performance which was much more sophisticated than my own sorry contribution to the performance.

I’m talking of Jamie Wood’s one man show O No! which is visiting HOME in Manchester as part of the Orbit Season which showcases “the most exciting Theatre from Edinburgh and beyond.” In a nutshell it showcases productions which have come out of the Edinburgh Fringe and one of the really exciting things about the Edinburgh Fringe as an audience member, for those who have never been, is that you can walk into a show without the faintest idea of what a show will be and it may be either the best show you’ve ever seen or the worst show you’ve ever seen with a strong chance it might be the weirdest. That risk is part of the fun and I kept this open minded ethos with me as I came to see O No! tonight knowing very little about the show. Fortunately I had a great time. 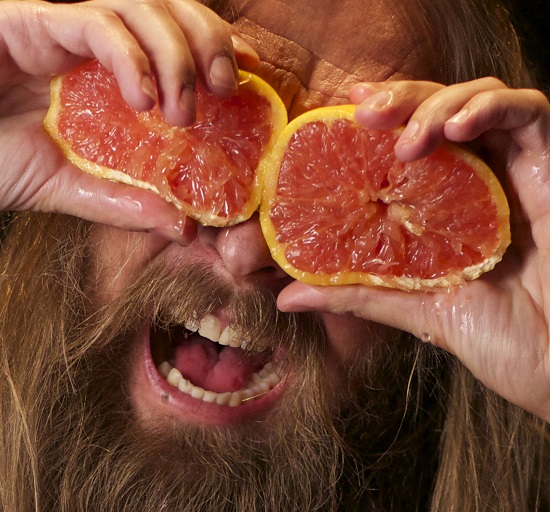 I’m not sure whether to describe Woods show as a tribute, homage or parody of the work of Yoko Ono and the 1960s Avant-Garde but what is clear is that all of the material is handled lovingly with tongue in cheek without ever admitting to being so. This subtle and intelligent technique is what lends mystery to this piece and gives it its strength. It’s a great way to approach the subject of avant-garde art which all too often takes (took?) itself too seriously. Woods carries the audience along with him as he re-created some of the event scores from Yoko Ono’s book Grapefruit engaging the audience to help him out (hence the nail incident) with rather amusing results all the way through.

Occasionally after intense binges of Shakespeare, Pinter, Miller and such like one does need an antidote to such heavy mainstream theatre and O No! provides just the right amount of weird and wacky, largely with a understated sense of attention to detail. As we enter the room we can smell incense. This understanding that senses beyond site and sound require stimulation is something which pervades this production and is a strong feature of many of the schools of the avant-garde but has yet to properly integrate into the mainstream as much as certain other features.

There’s an academic argument about whether the avant-garde has reached its natural conclusion. Woods offers a re-visit of 20th century avant-garde and potentially this might fire synapses to begin the advance of bold artistic ideas once again. I can’t think of a more engaging way to do that.