Normally I’m a sentimental old fool and I have to admit that, at the end of tonight’s opening performance I did shed one solitary tear but the main emotion I felt throughout the show was laughter.

This wasn’t because the performances were in any way laughable - I actually felt that all of the actors on stage tonight gave of their best; unfortunately, for some of them, their best wasn’t good enough.

The big issue I have with musical theatre today is that having “a name” supersedes the need for having genuine talent. This being said, I don’t blame the performers, I think the error must be laid at the feet of the production company.

Sarah Harding (as Molly) and Andy Moss (as Sam) gave of their best tonight and I did enjoy their combined performance. There were times when they shone through: a particular song suited their voice or a particular scene had the right emotional cadence; but overall I found both their performances didn’t fully connect with me and I felt, at times, they were straining to attain something that was actually out of their reach. 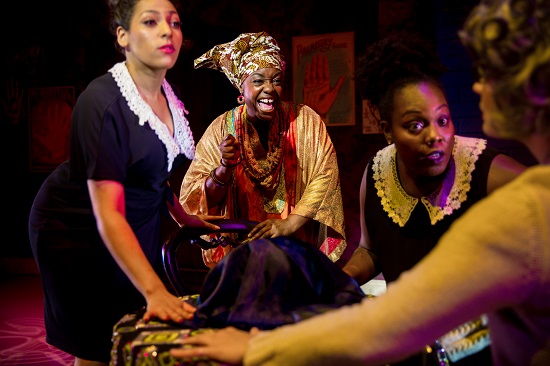 Having said all that, it didn't spoil my night at the theatre. When I first watched Ghost the movie I actually had a similar reaction, Demi Moore and Patrick Swayze weren’t the stars of the film, it was Whoopi Goldberg. In tonight’s show it was Jacqui Dubois (as Ode Mae) that stole the top billing for me - in every scene and every song she was in, she drew my attention and my laughter. It was a performance inspired by the film, using similar lines and scenarios, but it was also uniquely Jacqui’s interpretation. I loved it and so did the audience - she elicited the loudest applause of the night.

The supporting cast were also on top form, they sang, danced and moved scenery in equal measure; many of them playing multiples characters. “You Gotta Let Go Now”, sung by James Earl Adair (as the hospital ghost) was a particular highlight. He had such a warmth in his voice and performance that I immediately connected with him and wanted to see more of him. Sam Ferriday (as Carl) also stood out and his reprise of “Here Right Now” in the second half, however manipulative in its intention, was vocally much more satisfying.

Overall tonight’s performance had the essence of the film but lacked the same impact. The staging and lighting were good - although I did notice a few adjustments being made to the scenery during the scenes (it is the first night in a new venue). The special effects reflected the smaller budget than its West End run and this was a little disappointing. Finally, the music, well that was superb. Under the direction of Tim Whiting and Scott Alder the music created a voice that supported and propped-up the performances on stage.

And why the solitary tear? It was the use of “Unchained Melody” in the last scene - a piece of music that evoked such a strong connection to the original movie that I found myself crying!

Ghost the Musical continues it run at the Palace Theatre, Manchester until Saturday 29th October.