There is something inherently comic about someone eating a carrot.

I challenge anyone to try and be taken seriously whilst chowing down on a noisy, crunchy orange vegetable, particularly in an otherwise quiet setting such as an open-plan office or a deserted train platform.

As a tight-lipped, hungry, stilettoed Anna (Emily Spowage) munches on her carrot, offered to her by the still guarded and watchful Beth (Laura Lindsay, also the writer and producer), who glibly apologises for not being able to provide any hummus, we laugh.

It's one of several moments of levity in what is often quite a dark play, as three women's lives collide by chance one night in an empty train station. 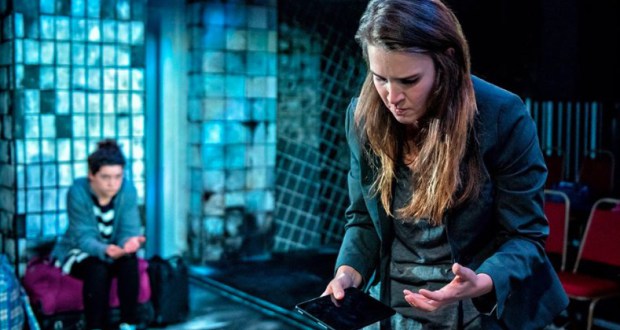 At the beginning, Anna (who has just missed her train) and Beth (surrounded by suitcases; just looking for somewhere to think) face off at two ends of a platform, forming their own silent snap judgements and misconceptions as we, too, try to avoid catching the eye of the person sat directly opposite us.

In this psychological game of cat and mouse, details are slowly revealed and divides crossed as we learn of the reasons why these two ostensibly very different women find themselves sharing platform space in the middle of the night.

Later still, their uneasy, quiet truce is disturbed by the arrival of C (played with wonderful energy and sensitivity by Arabella Gibbins) who uses the 'f word' like a comma and is keen to defend her patch from intruders.

We learn that the loos recently offered Beth a temporary respite from the unrelenting monotony of her day job....but for C, they offer a more long-term and literal shelter. However, C neither invites nor welcomes Anna or Beth's pity, or ours, and her pragmatic outlook is both humbling and sobering.

There is great pleasure in a simple premise skillfully executed and that is precisely what Parallel delivers: three actors, one setting, and an intelligent and subtle exploration of deep, emotive themes such as mental health and homelessness.

Of note, also, is the big red dice that is thrown at the outset of every performance, which determines who will play which part. The roll of the dice could easily have been just a cheap gimmick - a self-indulgent parlour trick solely intended to show off the versatility and talent of the three actors (which is considerable). But in the context of the play, it works. Because there is no reasonable explanation for the circumstances into which you are born or the genetic hand that you are dealt. Only chance.

Tonight, my audience rolled a two. I may never know Arabella's Anna, or Laura's C, or Emily's Beth, but equally I may never know the hopelessness or total absence of joy that characterises depression, or what it feels like to sleep night after night in a train station bathroom. But maybe, with another roll of the dice, that could have been me.

Aside from being an excellent, thoughtful and assured piece of theatre, Parallel reminds us that you may never know someone's personal circumstances or what private struggles they may be facing - so it's best to be kind, and exercise compassion where you can.