I should like, if I may, to start this review with a direct transcript from The Contact Theatre's brochure. I am doing this in order to highlight my expectations from the actual outcome. I therefore quote, "Lookout is a one-to-one encounter between one adult audience member and one child performer taking place somewhere high up overlooking the city. Together performer and audience member look out at the city and imagine its future.

The conversation they share is a quiet journey through the past, present and future guided by the streets and landmarks laid out before them. Through dreams of utopian architecture and possible catastrophes, hopes and fears, future fashions, proposed demolitions and progress real and imagined, they explore two very different versions of the city they both inhabit. An exchange between two people who might not normally meet, about a future world they may or may not share. Lookout is an attempt to consider big questions in a small way. Developed through a series of workshops with local children, each new version of the piece is unique to the city it is created in and the people who call that place home." 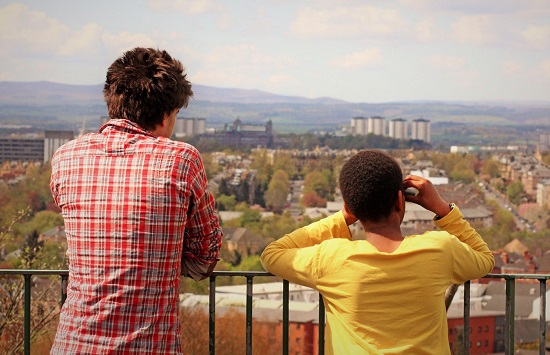 The location for this 'encounter' was the 28th floor of City Tower, Piccadilly Gardens, Manchester. The 28th floor is the highest point in the city, or at least was until the Beecham Tower came along, and so, as you might imagine the view was utterly stunning; and even though it was well and truly dusk going into night when I had my conversation, the hills beyond and the cityscape was quite something; there was even quite a spectacular sunset starting. I had never seen the city from this perspective before. The augers were good; I could imagine a million or so different topics of conversation starting from looking out over this expanse.

However, sadly the reality was somewhat different. What should have worked and worked extremely well, simply didn't and it failed to engage. What was an extremely interesting concept was much more a research project, and had absolutely nothing to do with theatre, and it could in no way be classed as theatre. If I am to understand correctly then the man behind all of this, Andy Field, intends to take this project to as many cities as possible in order to create a database for the future. An archive of young children's ideas and aspirations for a future city. This is all well and good, and no doubt quite a worthwhile 'experiment'; but the way it was presented to us was far from any remit of 'theatre' I have yet encountered, and the idea was not utilised to its full potential.

On arriving at City Tower, the audience, just 8 people, were taken up to the to the top floor and given a small hand-held device which we should listen to once positioned at our individual windows. I received mine and went to the red window as instructed, and listened to the recording. It was the voice of a young girl who introduced herself as Megan and that she was 40 years old. She described the city to me and what she could see...umbrellas in stands to use for free if caught in the rain; buses powered by rubbish; a long glass bridge over the city filled with flowers; electric cars. It took a while for me to catch on.... she was describing her vision of the future, and as I turned round, standing next to me was 10 year old Megan herself, and this was a recording of her ideas for a Manchester in 2046. We were then briefly introduced, and she asked a couple of questions of me, before bading me to listen to the second part of the recording. This was her again, but now aged 70 and the year is 2076. This was a more apocalyptic vision, as now the city is practically underwater and we are all living in tree houses or barges. There has been and still continues to be a flood which makes the water contaminated with the sewers and there are dead bodies floating in the water. This recording finishes and there is again a very small amount of actual personal interaction where Megan asks another couple of questions from me before saying goodbye and switching the machine on again for me to listen to the next instalment. This is not just Megan but all the children speaking individually and voices overlapping. It is their vision of a city 90 years into the future, when they will be 100 years old. The city is therefore, depending on which voice you listen to now called 'Snow Chocolate', 'City Of Water' or has been destroyed completely by a huge tornado.

The 'encounter' lasted about 20 minutes, perhaps a little more depending on how many questions were asked, but to be honest I felt cheated.

My 10 year old Megan was a bright, smart, well-spoken and intelligent individual with some lovely ideas for the future. Why couldn't these have been spoken and shared live. We were promised a one-to-one encounter, but in reality the majority was a solo experience listening to a voice, and what was live was just a series of questions which she had been given to ask me. [were these questions ones which every one was given or were they individual and thought of by the child?] I feel the producers had greatly underestimated the abilities of the youngsters, and instead of providing a totally unique dialogue between 'performer' and 'audience member', it was extremely stilted and lacking in any form of humanity. I was just about beginning to build up some rapport when it was all over.

The venue itself was also somewhat irrelevant. These 'conversations' could just as easily have taken place in a darkened windowless room. The city as is was never mentioned and our conversation never referenced the present day cityscape at all.

It was such a great premise, and could have provoked goodness knows how many different conversations, and indeed, being commissioned by a theatre rather than a research organisation or a city council, could and should have been more of a theatrical experience too. It was a huge let-down.