When Both Sides Surrender - 53TWO, Manchester

Manchester Actors' Platform and 53TWO have been around for only a few months, and already they are taking Manchester's theatrical world by storm, and with this, their latest offering, they must surely be affirming themselves most concretely in the belief that they can do for plays what Hope Mill are now doing for Musicals.

When Both Sides Surrender is not an easy play. It is the kind of play which requires a huge investment from both performer and audience, and although there are a few extremely funny lines, these are slight tension relievers which are excellently placed. The play is tragic, unashamedly so, and offers no apology for it. 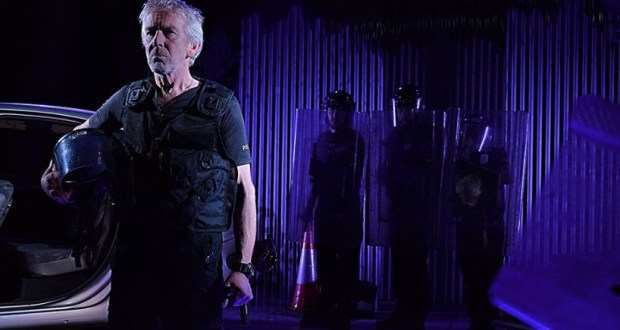 It is also very different, and it took me a little while before I got it, but once I did, I was captive and was your prisoner until the end. The play is written in verse, and not just any verse but in iambic verse, making it very Shakespearean. The language used and the style of speech takes it back even further to Greek Tragedy, and even the directing and use of soliloquy gave the play a truly 'ancient' feel to it. And yet this is a contemporary play by up-and-coming playwright Scott Devon, and the setting of the play is current and of the now, so why should the play make a deliberate attempt at harking back to ancient times past? The answer, I think, is that the themes of the play and the message of the play are ones which have been being written about since men put quill to parchment, and yet, we still need to write and tell about them since they are still happening and relevant as much today as ever.

There is a riot, a huge riot happening in the city; the police are fighting a seemingly losing battle against an angry mob, and the whole city is taking sides. A young man was knifed to death by a policeman; but this was justified as the young man had a gun, and therefore the killing was lawful. This is the catalyst for a rather apocalyptic vision of a city out of control. The senior policeman sergeant utters the wish that both sides should surrender, that is the only way forward for peace. However, even he doesn't believe that any more when he hears news that his son has been killed in the rioting, and thus plots revenge.

In a cast of sterling performances, there were three stand-outs whom I wish to highlight. For me, the most real and sympathetic performance came from Matt Hall, playing the First Officer. A young actor whose realistic and focused portrayal impressed greatly. Andrew Readman's Senior Officer was passionate, stalwart, and every bit 'Shakespearean' in declamatory and tragic stance and voice. The play needed a firm trunk from which the branches could spring from, and Readman gave both trunk and roots with accomplished ease. And the third cast member to impress just that little more than all the others was 53TWO and Manchester Actors' Platform's owner, Simon Naylor, playing Mike Winters with unerring realism and truth.

It wasn't just the acting though which impressed. the directing by Lawrence Evans was secure, tight and realistic. The pace was good, and even in scenes which could have become sluggish or self-indulgent, they never were, and the energy levels and heightened tension was maintained throughout.

The set was superb. (Richard Cooper). Stage Right was taken over by a wrecked car, with Stage Left a picnic table, and a comfy armed chair. All over was debris, rubbish, traffic cones, lager glasses, and excellently lit.

All in all, this was one of the most intelligently presented pieces of hard-hitting and thought provoking contemporary drama that I have seen presented on the Manchester Fringe in a very long time.