Much Ado About Nothing - Opera House, Manchester

The setting of post First World War England is the perfect backdrop for one of Shakespeare’s most loved comedies of love - Much Ado About Nothing at the Opera House Theatre, Manchester. The touring company from the RSC have brought a contemporary twist to this tale of maiden’s honour and passion.

The role of Beatrice played with the fight of a feminist by Lisa Dillon brings to the fore Shakespeare’s skill and love of creating strong women. Creating this production in the time female emancipation is perfect for getting across the feminist thread throughout this play - Dillon’s characterisation of this part, takes it into the 21st century - with a marriage of equals the ultimate aim of both male and female. This is a great comedy, which is brought to life by the perfect comic timing of physical performance and verbal delivery. 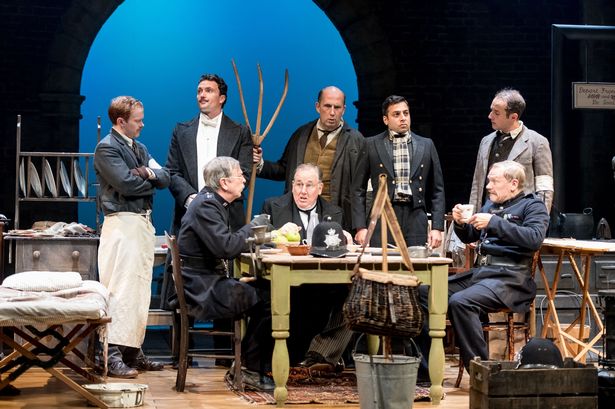 Benedick played by Edward Bennett’s clowning around behind the Cubans and up the Christmas tree wouldn’t be out of place in a West End pantomime and brings out the best in Shakespeare’s lines. At the peak of laughter, his monologues to the audience Bennett worked the crowd and off their laughter. Where a comedian would have given a verbal ad lib, his facial expressions milked the lines to perfection.

As the police constable Dogberry, Nick Haverson leads the laugher with his per comic timing and the occasional bit of slapstick comedy.

The young groom Claudio, played by Tunji Kasim, gave an honest and sincere performance as the man who believed he had been wronged by his bride, Hero, played by Rebecca Collingwood. With John Hodgkinson playing Don Pedro, Claudio’s comrade, who wins the heart of Hero for his friend a strong working relationship brings a tight performance from the duo.

The musical score of the play added an extra dimension and emphasised moments of hilarity and the more somber moments and left the audience humming a long as they left the theatre. It was a real treat to have live music accompanying the performance with the musicians under the musical director Bob Broad. The character of Antonia’s son Balthasar, played by Harry Waller, performed some beautiful solos throughout the play, often accompanied by the cast as the ensemble.

With a wonderful set that brings the grader of an English country home and chapel to life, the RSC have brought to the North the perfect production - accessible, entertaining and adorable. The audience applause and cheers reflected a fun night at the theatre.