The Island, The Sea, The Volunteer and The Refugee - HOME, Manchester

Part of PUSH Festival at HOME, The Island, The Sea, The Volunteer and The Refugee takes the audience to the island of Kos in Greece, where the small island has been inundated with refugees fleeing the war in Syria. Louise Wallwein plays the role of a volunteer helping the migrants as they arrive to safety.

Verbatim is not my favourite style of theatre as it has the potential to be really boring. However, this production is dealing with such an important issue that I think it is imperative the stories are told as they are, otherwise it wouldn’t have the desired effect.

The audience are taken from the main foyer into a corridor and are eventually led to what I can only describe as a store room. The room is made to appear as a refugee camp. Bags of donated clothes and other items are stored away on shelves and divided into size, ready for the migrants when they arrive.

In the room there is a screen that displays images of the island, the sea and the refugees. The images are great and act as a good aid to the poetry and verbatim. Some of the images are heartbreaking as we listen to the stories that accompany them.

The lighting in this production is adequate given its intimate nature. As actor Sushil Chudasama plays multiple roles, the change in lighting acts as a clear indication that he’s changing character. However, he adapts the personas so well that the lighting isn’t necessary, it acts as extra clarity.

This is a nice production and clearly serves its purpose. Some of the poetry is beautiful and at times difficult to listen to. It certainly made me think “There is no them and us. There is only ever us”. 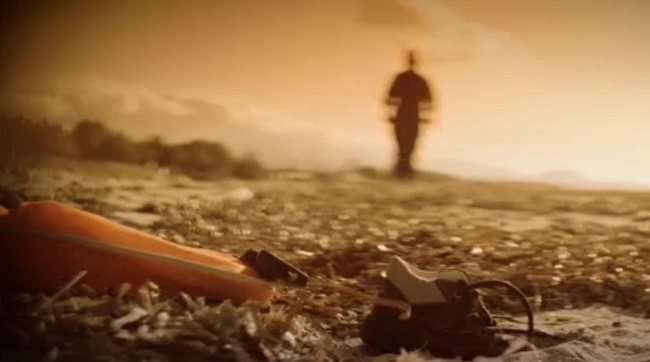