People Zoo Productions are back in Manchester with The Trial of Josef K, a grotesque and chilling pathway which depicts Josef’s year of nightmare when he is arrested one morning - on his birthday no less, without explanation or pity. Originally written by Franz Kafka, The Manchester based company People Zoo Productions bring their adaption which takes a twist on the darkness of the story and gives it a comedy edge, which essentially includes the audience in the hypothesis that “Everyone is laughing at Josef”.

Josef K’s arrest comes as a shock, so much so that he sets out to get the answers he needs on just what exactly he is accused of. Played by William J. Holstead, he begins as a cocky man of importance who has every hope in getting to the bottom of this injustice of the system, to a quickly deteriorating mess of a man who becomes helpless and unable to see a way out. A fantastic interpretation of the character when compared to the original, Holstead manages to have the audience believe everything he is going through, and does so in a timely progressed manner that it doesn’t escalate too quickly or at too slow a pace.

Along side Holstead are 5 other cast members, each taking on a staggering amount of roles meaning that the quick changes between each character had to be spot on and distinguishable. Immediately catching my attention for her ability to drop and pick up between each character and have it completely believable was Amy Gavin. It’s rare when in multi role that you completely forget the actor who played the previous character is now someone else, and can sometimes be a little hard to get your head around, but with Gavin it was easy to focus and not think of her as an actor but rather the characters in question. My particular standout character played by Gavin was that of the flogger, which for plot purposes will be the only detail I’ll go into, but for those wanting to go and see should definitely do so for this character as she was able to deliver a humour that seemed second nature and perfectly showed off just what is meant by the comedic side of their adaption.

Another noteworthy mention of cast members is that of Matt Holt and Evelyn Roberts, who both worked together on the adaption of The Trial for stage performance. If you’re familiar with the original or other adaption’s for that matter, it is quite clear to see where their inspiration had came from but also where their own flair had been added. To work on both sides of the spectrum i.e. making it work for stage and actually performing too is no easy task, but both Holt and Roberts did a admirable job and it portrays just how professional and worth their salt the company are.

Directed by Craig Sanders, fantastically it has to be said. For a story that demands such quick and many scene changes its hard to keep up that level of detail and energy in each state, but his efforts and those of Hanna Davis on Design clearly speak for themselves time and time again throughout. With only 2 actual states changes of set, one being for the first half and a quick change during the interval, the whole set relies on imagination of the audience, a piece of sound used to determine a change in scene and a few clever touches shifted around with set and props put into action during the performance by the actors, such as wooden plank boxes becoming a make shift door and a mode of transportation. It was refreshing to have the performers visible on stage behind the built up set even when not physically a character in the scene, as it further backed up just how strange the story line is and allowed you to become aware that these changes where happening right in front of us and only really portrayed by a slight costume change.

My only criticism would be to mention that during the fight scenes, and frankly there are quite a lot, some of it was not as realistic as the rest. I do appreciate the choreographed fight direction was intense and demanding and for the most part was excellent as it had the ability to grab those gasps from the audience, but in parts didn’t quite look like any contact was being made, which I am sure was not what was originally intended.

The Trial of Josef K in its originality has always been a novel in which shocked the viewers by its brutality, sexual themes and 100 layers of confusion and in many ways this adaption has lived up to just that. It arises a lot more questions than it answers which is the beauty of it some would argue, but from a political standpoint, it can show just how harsh the system can be. Based on the content within although tastefully done for the most part, it is not recommend that this is for an audience of the younger age bracket, but for those that are 16 and above I highly recommend giving it a watch. Showing at Manchester Home Theatre at 7pm on both the 17th & 18th of January as part of their 2017 Push Festival. 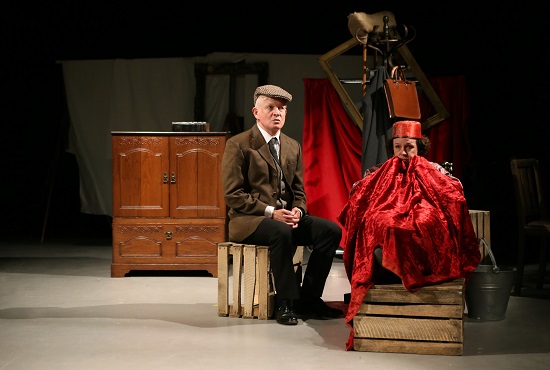