We entered one at a time, walking down a long dimly-lit corridor, we were alone. As I entered the theatre the ﬂoor was strewn with strip of torn paper. Discordant chimes ﬁlled the air, hypnotic, almost spiritual, other worldly. The stage was ﬁlled with boxes of light - some lit from within and some with mapped projections on them: “FRAGILE, Handle with care, Thank you”. On our chairs were small balls of screwed up paper. The audience sat in silence or spoke in very hushed tones.

The house lights dimmed, the lights ﬂickered and Mina revealed herself. She appeared safe in a cocoon of paper but then scenes from her life appeared in the boxes around her. Disturbing, emotional and intimate scenes. It wasn’t clear in regards to a time line, but there seemed to be a younger Mina facing ‘therapy’ and an older version who had found love and acceptance.

Mina is a retelling of Nataly Lebouleux’s award-nominated short ﬁlm ‘Paper Thin’; part of the PUSH Festival 2017. It combines projection mapping, stop-frame animation, physical theatre and video footage to explore the experiences of Mina. We she her being handed over into a surreal world of gay conversion therapy and exorcism. We also see her happy, loved and supported by a lover. 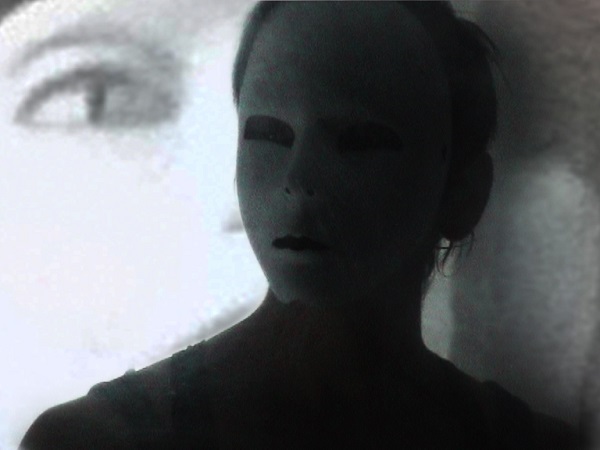 We never hear Mina’s voice but the performance is full of emotion. There are looped sequences visually and audibly, these were of a length, for me, increasingly uncomfortable.

This 70 minute performance piece had good intentions. The staging and lighting were interesting and thought-provoking; there were some strong imagery throughout.

The scenes we are shown of Mina, although rooted in the real experiences of the LGBT community, are told in such a way that they don’t land emotionally. I was intrigued, even mesmerised at times; I felt uncomfortable and verged on anger at one point, but ultimately it left me stunned and slightly numb. I really wanted to hear Mina’s voice.

It is an important issue and theatre is a medium that can be used to highlight them, bringing them into the public eye for scrutiny and discussion. I just think tonight’s performance is missing something.