From the perspective of a critic I’m gradually going off press nights as a reflection of the actual show. You’ll never hear me complain about a free drink and in this case a slice of pizza, no sir, however I’m increasingly feeling that the effort and pressure involved in a press night performance generates an atmosphere very different to any other performance and can make it difficult to present a true reflection of the play which will be seen through the rest of the run. Last night, seeing The House of Bernarda Alba at the Royal Exchange this feeling in my bones was never more present.

Federico Garcia Lorca’s play translated by Jo Clifford for Graeae Theatre Company follows the lives of a family ruled over with an iron fist and acid tongue by matriarch Bernarda in the wake of her husband’s death and funeral. It’s a brilliant performance by Kathryn Hunter playing Bernarda who made the play considerably more interesting. While no performance could be faulted there were times, invariably when Hunter was not onstage, when I felt my attention wandering a little too often and for a little too prolonged a time. This lead me to investigate some admittedly interesting details of the set and ask questions such as is that floor pattern lit by a gobo or painted on? It looks very nice. These shouldn’t be questions I would be fretting about if I were totally immersed in what’s happening onstage. Without Bernarda onstage exercising her caustic nastiness, which is wondrous to behold, I get bored by the rest of the play. I don’t think this is the fault of anybody onstage or indeed the creative team behind this project. It’s simply how the play is styled to give a vehicle to Bernarda. 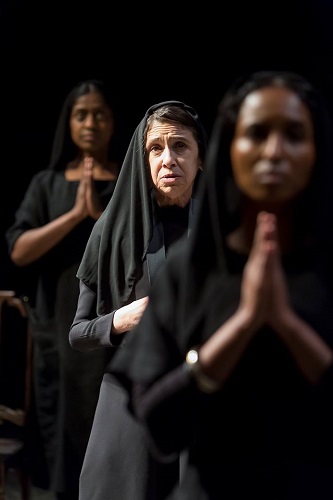 Graeae Theatre company specialise in developing work with disabled actors. They do it very well though bringing their work and The House of Bernarda Alba to the Royal Exchange highlights my earlier point regarding having the right audience for the show. Through some interesting dramatic devices director Jenny Sealey and translator Jo Clifford incorporate into the text some incredibly strong ideas, blending seamlessly between sign language to regular dialogue, aiming to make their style of theatre accessible to a wide range of audience members. I don’t speak sign, (though if anybody wants to teach me then I’d love to learn) however some of the most watchable moments were when the actors were communicating with very little spoken word and slightly more sign. There’s a scope for a lot of academic study, which I won’t go into here in detail, regarding the use of alternative sign systems to communicate meaning in this play. For a geek like me that would be delightful, however my suspicion is that the press night audience made up of friends, family and hack critics were, to an extent ambivalent of these aims in this production. Perhaps I’m being harsh on friends and colleagues but one feels that when the intention is to bring a wider range of audience in to see this play, including disabled and deaf audience members this hasn’t happened on press night but hopefully a wider blend of audience demographics will be achieved as the run goes on.

Despite some of my reservations and criticisms, I respect this production immensely. It’s a production which has excellent goals and is going a long way towards fulfilling them. Early in the run still, minor issues have plenty of time now to sort themselves out and with the right audience getting to see the show and appreciate it for what it is, this show can do great things.

For a BSL video introduction to this show click HERE