For two nights only, Tandem Productions takes over the main stage at Manchester's newest small-scale theatre. They present three plays that although on the surface may not seem in any way linked, do have some interconnecting themes of family, love, and comments on today's society.

To start, came a play which I am certain I have seen in an earlier version or - perhaps before the present rewrite - as it did seem unerringly familiar, although I have not seen it in it present form before. It is 'Sugared Armour', written and directed by Anita Pandolfo. We are shown the ante-room to an Intensive Care Unit in a hospital where the three siblings of their dying mother gather. It's the starting post for what could have been some really dark humour and thought-provoking moral questioning; however, this piece steers well clear of the controversial, and ends up much more like three adult children still continuing their childhood squabbles and grievances into adulthood. Sadly, the play didn't really worked quite as well as perhaps it ought to have. It starts very slowly, and the pace only picks up on the entrance of the third sibling, but there is a distinct lethargy about the whole piece sadly, and I found my attention drifting, being unconcerned about the people and action on stage. This was also due to some very poor lighting for this piece. There was a very bright section of stage and a normally lit section of stage; and there were many times when the actors were acting with faces partially obscured by shadow or two different LX settings. It proved to be a rather weak opening play unfortunately, despite some rather nice lines. 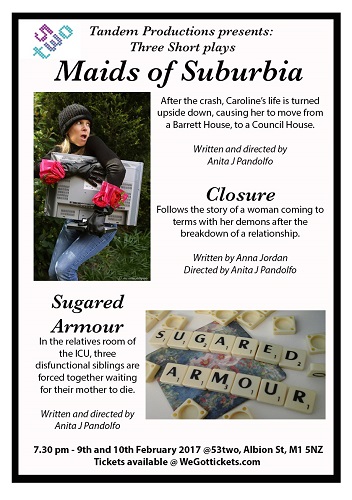 The second piece followed straight after this, and this was a play that I had definitely seen before. In fact, not that long ago, in the same theatre, with the same actress, for a series of short plays that was called North / South Shorts. This is a monologue, and we see a lady in a restaurant talking to the man she really cannot live without. Their relationship has ended some time ago, and this is apparently a chance meeting, but she needs him and wants to have him back, but we learn that he has someone else now and has a child on the way. It's 'Closure' by Anna Jordan, and felt a lot tighter and more secure than last time. Actress Alex Maxwell had found much more within this monologue and character that it was a pleasure to watch it again so soon after the first time.

After a short interval and on to the longest of the three pieces, and again a monologue - only this time, the piece was completely new to me. Maids Of Suburbia proves to be a rather tour-de-force piece for any actress to tackle, as there are two protagonists, and both played by the same actress. Victoria Scowcroft put her all into this piece and it paid off, under once again the direction of Anita Pandolfo. It's a very long piece, perhaps too long, and the blackouts were a little distracting. Every time one came along I thought it signalled the end of the piece but no, there was always more. In a nutshell, we see both Caroline, a middle class upwardly mobile social climbing mother of two who has allowed herself to get badly into debt and has been forced into a council house in a rather poor estate, but still has pretentions of grandeur, and on the flip side, we see Angela, who despite being council estate born and bred, has a heart of gold, and the two become unlikely friends and allies. It is only when their limits are tested to the full, do they do things totally out of character and help to save each other. I really enjoyed the story of this play and the journey that the two takes, and there were some lovely laugh-out-loud lines too; although I did find the piece overlong and rather slow. I felt it would have been better either cut down to a shorter more succinct monologue or to have written the piece for more than one performer.