The revived 1950’s production of Arthur Miller‘s blistering classic American drama ‘The Crucible’ came to the Opera House on Quay Street in Manchester with an amazingly talent cast. Charlie Condou, who is best known for the role of Marcus Dent in Coronation Street, played the witch-hunter Reverend Hale and ‘Call the Midwife’ star Victoria Yeates as the role of Elizabeth Proctor.

They were joined by Eoin Slattery, whose career includes roles at The National Theatre, The Royal Exchange Theatre and Hull Truck, as John Proctor and Lucy Keirl, who recently took the role of Juliet in The Watermill’s 2016 production of Romeo and Juliet, as Abigail Williams. Other cast members comprised of, Paul Beech as Francis Nurse, David Delve as Giles Corey, Cornelius Clarke as Reverend Parris, Diana Yekinni as Tituba and Mercy Lewis, David Kirkbride as Ezekiel Cheever, Eleanor Montgomery as Ann Putnam and Susanna Walcott, Augustina Seymour as Mary Warren and Rebecca Nurse, Leona Allen as Betty Parris and Carl Patrick as Thomas Putnam and Marshall Herrick.

The Crucible is directed by the extremely talented Douglas Rintoul, Artistic Director of the Queen’s Theatre, Hornchurch, who takes an intense approach to this potent story of witchcraft hysteria.

One of the twentieth century’s landmark dramas, Arthur Miller’s The Crucible stands as both a historical record and a political parable for our times. The unrelenting and violent witch-hunt, which was originally written as an allegory about the brutal reign McCarthyism, which swept across the political landscape of 1950s America, resonates into the present day as a stark and ferocious warning from the past.

In Salem, Massachusetts in 1692, Puritan minister Reverend Parris finds a group of girls dancing naked in the forest. Among them are his niece Abigail and daughter Better, who faints upon being discovered by her father. Knowing that they've sinned, the girls claim they were bewitched. 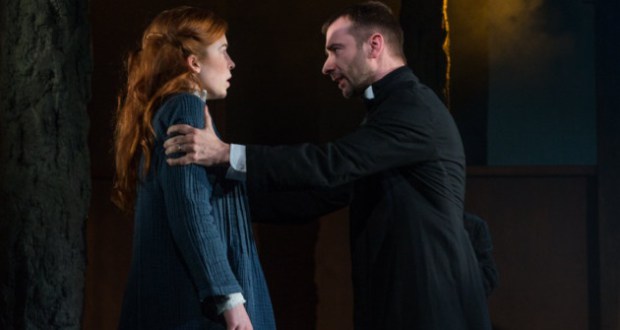 Given the severity of the claims, a special court is founded to investigate the accusations of witchcraft. Judges are sent from Boston to assist the residents of small town Salem. During the trials, the girls scream and faint whenever one of the supposed witches takes the stand.

Over a hundred of Salem's citizens are found to be witches. One of them, Elizabeth Proctor, proclaims her innocence to her husband, John. Her accuser, Abigail, was once an employee and was dismissed after Elizabeth discovered that John and Abigail were having an affair.

Realizing that Abigail has incited this witch hunt to target her enemies, John fights to save his wife. He admits his adultery, only to be accused of devil worship when Abigail denies the affair. John and Elizabeth are convicted of communing with the devil. The pregnant Elizabeth is spared, but John is hanged.

The staging was a basic wooden panelled backdrop which encompassed the whole of the stage, however some of the scenery changes where clumsy and noisy as all the actors did not wear microphones making the audience having to listen intensely to the spoken word.

The play lasted 3 hours showing the fantastic talent of the cast and their professionalism with their flawless performance.

The actors wore no microphones so the auditorium became an amplifier for the audience who ate sweets and rustled bags of consumables throughout the performance making it all too distracting for the people who wanted to listen carefully.

The storyline was captivating and a harrowing reminder of how lies and hysteria can lead to such injustice and deadly punishment.  The plot displayed a clear indication that the crowd needed their pound of flesh to satisfy the fears and beliefs of the unknown of witchcraft and magic.

A huge congratulation to all involved in this historical Arthur Miller’s drama.

The play runs until the 13th May at The Opera House and then continues on tour to Birmingham.