Tonight, I had the pleasure of watching ‘Heads Up,’ at HOME Theatre in Manchester. This was a solo performance which written and performed by Kieran Hurley. I was very surprised at first how the play only had one cast member recounting stories of other people’s lives, but this was extremely effective. The play ran straight through with no interval, which was interesting as it allowed the audience to become absorbed into the story that was being told on stage.

The simplistic and bare staging really helped convey and tell the story, as we see that he sits alone at a desk with a microphone and sound system whilst telling the audience about four different characters and how their worlds end. This was very effective for such an intense and thought provoking play.

As the speaker tells the audience about each of the characters’ lives, I felt as though the characters were all so different that no matter your age you could find something relatable with at least one of them. He talks about an unhappy teenage girl, a cocaine addicted celebrity, an office worker and a coffee shop worker. Each time he began to talk about a different character, we as audience members would hear a loud beep and change in rhythm, interrupting the flow of speech and making it clear he had moved on to another. I really liked how he portrayed the office worker’s life to be boring and monotonous, shown by lots of repetition stating how you should act and behave in the workplace. 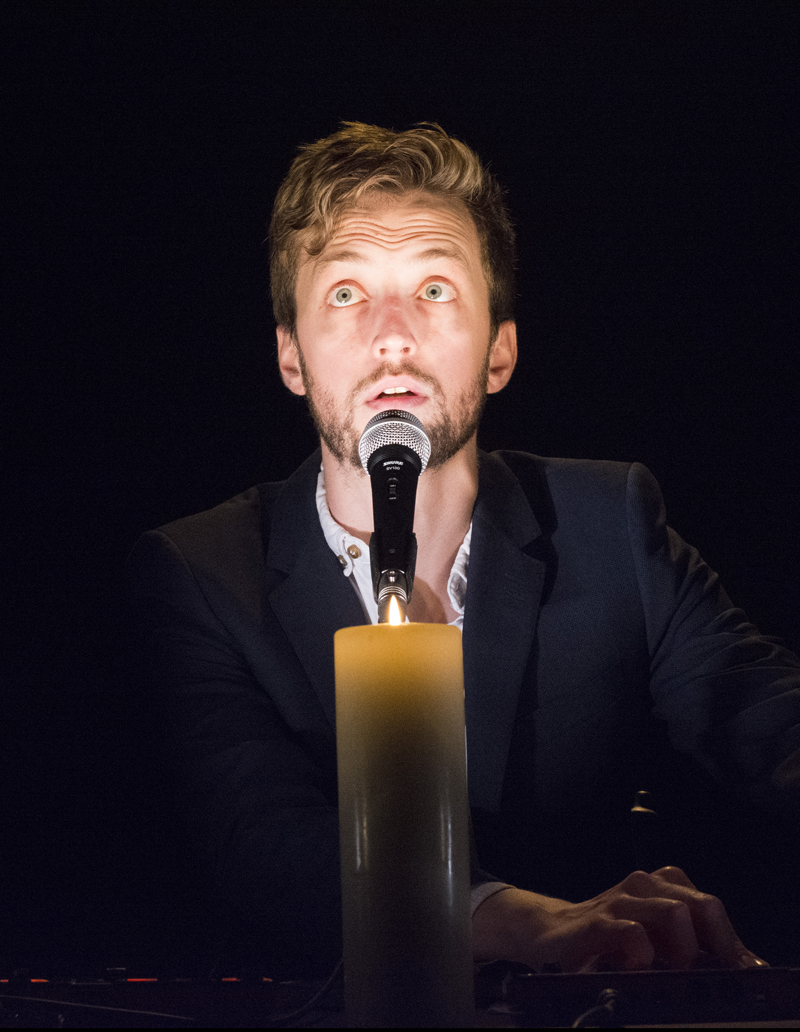 Another really thought provoking part of the performance which stood out for me was as he described the pressures of working in a coffee shop and constantly having to deal with the public. This character feels the pressure to always have to be ‘people perfect.’ Whilst this worker is in the coffee shop they observe unique people outside, who are preaching about love and one who is dressed in a glittery bikini. This coffee worker is also under huge amounts of pressure to impress a ‘mystery shopper’ and so is constantly looking out and watching for them.

The narrator compares what has happened to that of Pompeii, showing the destruction and how it has effected the characters in different ways. Along with a vivid description, the bright lights and loud sounds here also show this destruction, with the narrator falling slowly to the table as the music begins to fade.

The climax of the show shows how each of these individual characters end up losing it and their world coming to an end. We are constantly being reminded that the city he is describing is not too dissimilar to ours, and it is us as people who make up the city, we ourselves are the ‘schools, libraries and police stations.’ The play was as if it was a warning to all the characters it described and to the audience members to observe and appreciate the things around us rather than constantly taking them for granted. I thought this was interesting as he talked about social media, suggesting that this distracts and has caused us to be less empathetic, and how texting someone in the same room as us has become acceptable when we should be appreciating the sound of each other’s voices.

A very unique performance which I would fully recommend.