Magic is seeing somewhat of resurgence at the moment in theatres with the likes of Dynamo and Darcy Oakes about to embark on huge national sell out tours, so it seems perfect timing that Jamie Allan should be on tour now.

Sure there are the recognised ‘standard’ magic tricks like sawing a person in half but what sets this show aside from the rest is that it is packed full with technology and that really gives it the wow factor, as well as some ingenious twists on ‘old favourite’ tricks.

The show attempts to describe the evolution of magic and begins from the inspiration of Robert Houdin’s Orange tree.  Houdin is renowned as the father of modern magic and since then every magician has tried to emulate his magic right up until today.  Allan is no exception to this role and with 21st century technology he more than succeeds.

Following a mind boggling close up card trick, the first ‘old favourite’ to be updated is the Zig Zag Lady trick as well as the sawing a lady in half.  Both leave you absolutely speechless as you simply cannot see how physics allow what you are looking at to be possible.

Throughout the show Allen is assisted by glamorous pair Amy and Nat as well as the less glamorous but equally important Luke!  Each take pivotal roles in the magic performed.

Before the interval the audience are asked to send various bits of information via social media to Allan during the break, and standing in the bar at the interval there seemed to be more mobile phone activity than a normal Opera House show interval.

As the first half draws to a close Allan demonstrates sleight of hand that is breathtaking to say the least.  Performing a routine he admitted had taken most of his life to perfect it was clear the practice had made perfect, one only can imagine just how many thousands of hours it took, but every second was worthwhile.

The second half of the show highlighted just how 21st century technology has been able to change magic with iPads becoming an integral part of one trick.  It also became clear how the previously request information submitted by the audience during the interval was to be used in another ‘old favourite’ brought right up to date.

Allan states one of his main inspirations was founder and CEO of Apple, Steve Jobs.  In a salute to jobs Allan performed another mind boggling card trick which was closely filmed and displayed on two huge video screens either side of the stage, and perfectly choreographed to music.

As the evening drew towards its conclusion a little manipulation of laser beams was added to further heighten the wonderment on stage with our host seemingly picking up laser beams and twirling them like batons above his head.

We were told magic is not about fooling people, it is about creating a moment of wonder.  This could not have been more apt as the final illusion using a glass tank filled with nearly a ton of water highlighted.  Never have I seen an illusion like this played out live so brilliantly done.

Magic has never been so magical. 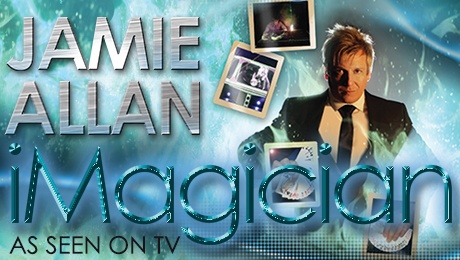