On the 40th year anniversary of the iconic punk film the Royal Exchange wrench Jubilee squealing and with a knife to its throat into 2017. Exploring political unrest, social inequality via themes of race, ability, sex, gender and class to name but a few, throw in a failed justice system and Jubilee highlights how our modern world has learnt no lessons from history and the real references to today’s world are tragically abundant.

The story is of a murderous subculture gang taking back control of their own desires and delivering their very own flavour of justice. They are surveyed by original Jubilee cast member and punk girl icon Toyah Willcox, playing a time-travelling Queen Elizabeth who is serenely guided by an angel to witness their turmoil and ultimate plight of selling-out. Willcox’s presence onstage was a comforting link to the bygone anarchy of the 70’s and 80’s but didn’t really feel like a crutch; Chris Goode’s adaptation is true to the original but still painfully relevant to 2017.

This riot plays out at full volume on stage, interspersed with insightful and cutting monologues from Amyl Nitrate fiercely delivered by the spellbinding Travis Alabanza. These direct addresses were refreshing and necessary especially in the first half. 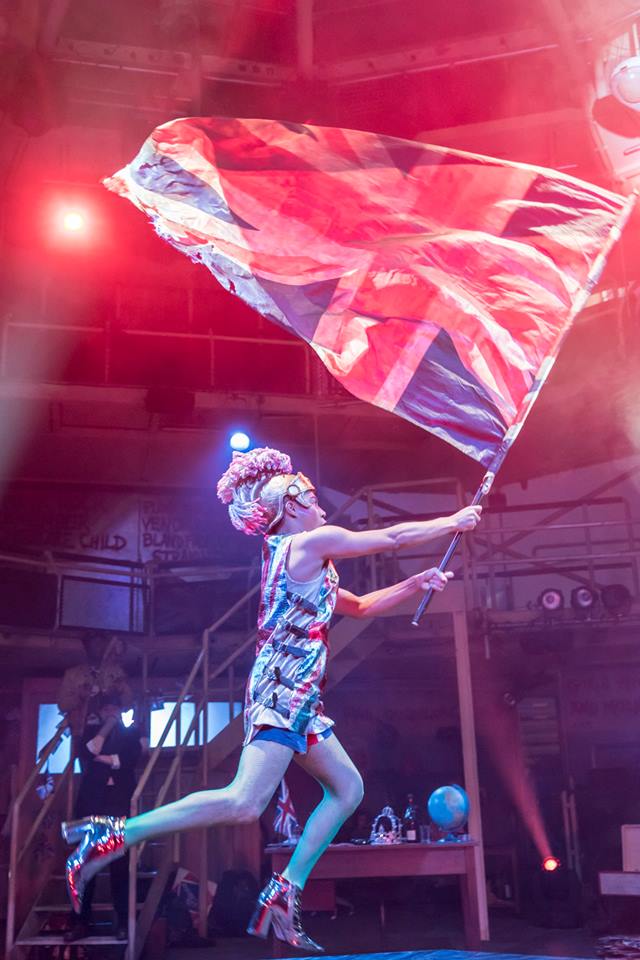 Although overly giddy with its punk rock aesthetic at times, the scripting and philosophy of Jubilee convinced me that it’s self-awareness is intelligent. Any rehearsed depiction of anarchy is going to be troubled, by default, as the original film proved. The characters discuss rehearsed theatre and art as misrepresentation of our true selves, as a room full of theatre critics awkwardly shuffle in their seats. Characters increasingly break the fourth wall as the show progresses, ‘What’s your name?’ ‘I’m just Second Cop’ the show certainly knew its audience on press night.

There is audience interaction in the form of shuttlecock games in the interval, we’re encouraged to whoop and shout, Alabanza loudly encourages our collective stiff British theatregoer audience to ‘let it all out’.

Interval engagement tactics aside, the second act is better paced and more action-packed than the first. We get some scenes away from the squat where the first half is based (designed by Chloe Lamford with graffiti, mattresses, low-lighting, and scattered clothes). Opening with the infamous Seal Nightclub scene after an invigorating dance routine to M.I.A’s Bad Girls, key themes of Queercore, creativity and DIY fully emerge. These characters don’t believe they’re doing anything wrong (except for the murders…), they’re just living their lives as their authentic selves. Jubilee toes the line between being an out-of-control burn-down-capitalism rave but the second half it rises up as a smart cutting-edge piece of theatre.

The whole cast were young but spirited. Alabanza, ‘Mad’ by Temi Wilkey and ‘Crabs’ played by Rose Wardlaw were devilishly sure of themselves on stage. Sophie Stone as ‘Bod’ was consistently commanding as a mob leader, Sphinx and Angel were seductive despite totally incestuous, and there was outstanding physical theatre from Yandass Ndlovu as ‘Kid’.

It was truly exhilarating to see subculture themes taking to an important theatre and mainstream audience. There was talk in the audience about content warnings of swearing, full-frontal nudity and not to take your elderly relatives, but hell, I say take them, maybe they’ll learn something, and we can show them how to revolt.