I cannot begin this review without mentioning the humble venue in which it was performed, Hope Mill Theatre. From the quirky vibe that welcomes you in, to the friendly staff who make the evening run smoothly, it is a wonderful setting to be entertained in.

The performance which runs for eleven nights, including some sell out shows is certainly worthy of your attention. I don’t remember seeing anything like it and applaud Jonathon Marc Sherman’s originality. He has created an interesting mix of seriousness and comedy in order to address the everyday questions of everyday people. His fast paced dialogue is extremely effective, enhanced by the actors performing it. 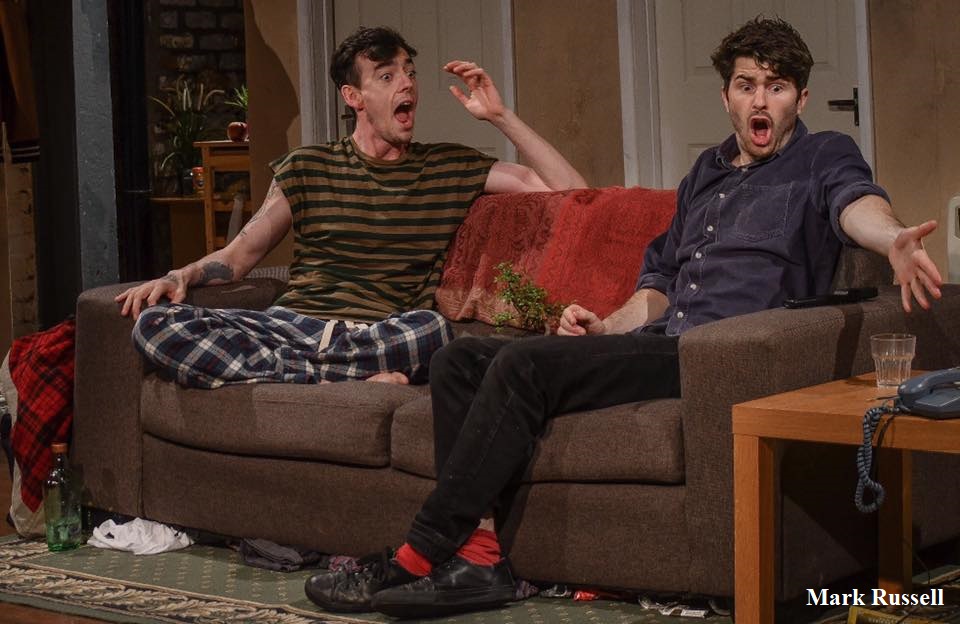 The four strong cast is made up of Alex Phelps who plays Teddy, William J Holstead who plays Sty, Paddy Young who plays Charlie and Hannah Ellis Ryan who plays Stella. The energy between the group ensured a perfectly paced piece of theatre from start to finish. Had the actors not had such precision in their delivery, including clear diction with accent exploration, this dialogue heavy play could easily have fell flat. Thankfully, it did quite the opposite and kept our undivided attention throughout.

The entirety of the play takes place in the three brothers flat with no change around of set. This is quite a rare feat in theatre but it certainly worked for director Daniel Bradford and the cast. Bradford’s use of the space was diverse and the setup of the flat was integral in capturing the audience.

Despite the whole of the cast showing their capabilities as performers successfully, I do feel there was a standout performance, and that came from Phelps. He seemed to have the edge with his facial expressions, physicality and all round embodiment of his character. His delivery of dialogue was as natural as they come and fascinatingly his complete change of situation leaves you unsure of how to feel about his character, Teddy.

When the interval came I was taken aback by the realisation that the first act had already finished. I felt like I had wanted to see more before we had a break and so that made me excited to go back in and discover what was to come. The performance felt like a ‘play of two halves’ in some respects. Circumstances had notably changed for the characters in the second act and one of the highlights of the play was that you never actually knew what was going to happen next. There was nothing predictable about the drama which was perhaps a metaphor for life, given the content of the story.

Unfortunately, the ending was disappointing. It didn’t seem to have much of a conclusion which made you feel rather unsatisfied when leaving the theatre. However, upon reflection it made me wonder if the ending itself was a metaphor for the play. The fact that life itself is often unsatisfactory and how most people are always left wanting that little bit more. It is unclear if that was the intention or not, but personally I would have preferred a more definitive closing scene. https://hopemilltheatre.co.uk/events/things-we-want/