In this World Cup year tutti frutti proudly presented us with Keepy Uppy the story of a young boy Joey played by Danny Childs and his mum played by Eden Dominique.

Prior to the start of the performance the cast including musician (and multiple character along the way) Vittorio Angelone. Wander round and interact with the children in the audience making them feel at ease, and part of the experience.

The show starts with Joey snoring away and mum shouts him. I am sure the ensuing battle to get him up which most of the parent’s present will relate to. This is where the high energy of both Danny and Eden starts. Mum reminds Joey that today is the day of the big match, Joey is to play in a final for his team.

Very energetic dancing along with fabulous use of props and music take us on the journey, through breakfast. Joey can even find time to imagine a game of football whilst having his cereal and boiled eggs. 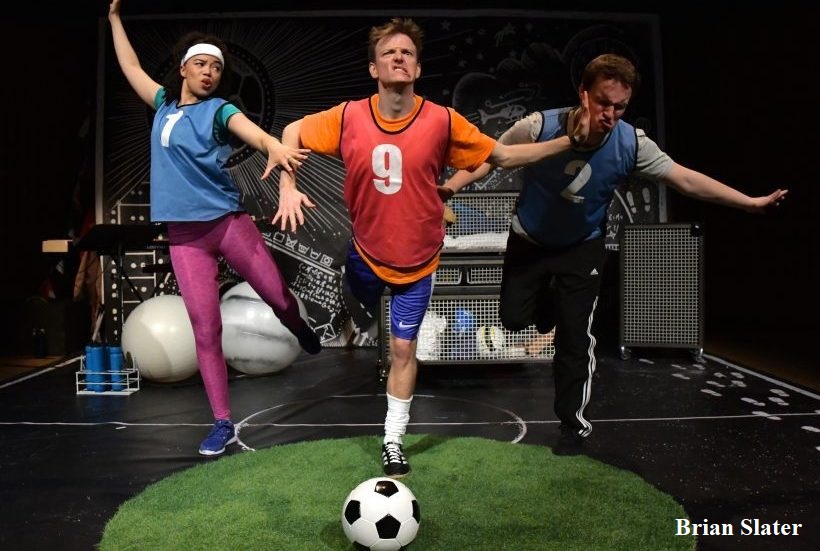 Oh no it was mum’s turn to wash the kit and Joey’s brother has not done the one job he was asked to do. Smelly kit for the team what will they do. So, the journey to the laundrette begins and Joey starts to panic over the time. Also, they need to head to the Chemist as Joey’s inhaler has run out. Will they have time to do all the jobs on route. Arriving at the Chemist things start to unravel, and Joey panics more about the time. Mum who is also mad on football just like Joey tries to keep him calm. Joey manages to imagine a football pitch almost anywhere will he be able to do it in the Chemist.

Mum tells Joey she has the half time oranges in the boot but what is this! Only one orange, where are the rest? Looks like another problem caused by Joey’s brother, best head off quickly to the grocers.

Time to get some oranges and have a bit of a musical interlude to the show with more energy than ever in the show from Danny and Eden. Will they get the oranges?

So off we go again, or do we? What has happened to the car? Oh no will they get to the game? Now it’s raining and off goes Joey. He tells mum its ok it’s on the school bus route. What can go wrong next? Will Joey get to the game?

More huge energy from the cast see’s Joey arrive at the playing field, why is his team on the side of the pitch? Oh no his team are losing, all because he is late. Time to play with some good skills on show from all of the cast, and still the energy levels are high. Scores are level what will happen will Joey’s team win? To find out you need to come to the show. You won’t be disappointed you don’t even need to be a football fan to enjoy this high energy engaging performance.

My son (aged 11) said afterwards “That is the best show of this kind I have ever seen”.

Keepy Uppy is written by Evan Pacey and directed by Wendy Harris. The performance of the cast is high energy throughout with foot tapping music and creative lighting offering superb support. Along with some cool footie skills great rhymes and very clever use of props this is a must see show to introduce children of 3+ to the world of theatre. Long enough to tell the story but not too long to lose the attention of the younger members of the audience. A true 5-star performance leaving you wanting to see more of this fab group.