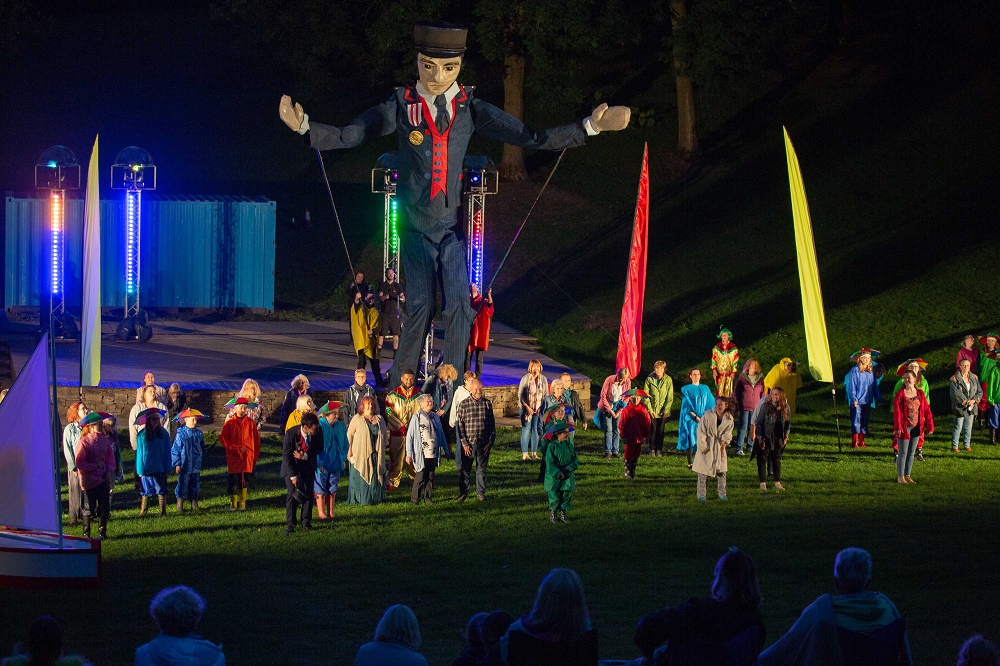 This promenade production of Jonathan Swift’s classic satire boasts it has the UK’s biggest ever puppet but this family meander round a Bolton park is much bigger than that in every way.

Bolton Octagon’s Outgoing artistic director Elizabeth Newman has long been interested in the idea of the outsider and what better text than Swift’s timeless tale which is all about the other, and the fear of difference. This might be a fun night out under the stars but it delivers a pertinent message for our times, and has real meaning in this proudly multi-cultural town.

As their theatre closes for a year-long refurb the Octagon invited families to come to the park who gathered expectantly round a bed planted in the middle of a path. Up pops Gulliver’s livewire daughter Betty who persuades her old man to take her on an adventure, and lo and behold we are off to Lilliput.

Followed by the crowd Octagon regular Michael Peavoy is a lively Gulliver with a touch of the Willy Wonka and Anne O’Riordon as his inquisitive daughter works the crowd as we come across the giant adventurer in the sunken garden tied down by the Lilliputians.

He’s the prisoner of a company of young locals who play the Lilliputians with great gusto and full marks to another Octagon regular Marc Small who stepped in at the last moment to play Lord Skyrsesh. It was a smart touch by Newman and co-director Ben Occhipinti to have the tiny people boogie to Sister Sledge and Doris Day thanks to the tunes stored Gulliver’s oversized mobile phone. 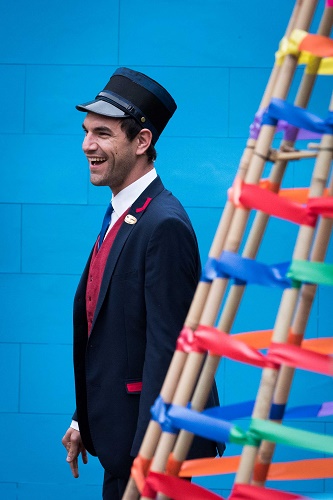 It is certainly a spectacular moment when the prone marionette, made by Hebden Bridge’s Handmade Parade, throws off his ropes rising spectacularly to his full 8 metre height to a round of applause as we head off to the Emperor’s palace in the Glade

Alexander Bean’s Emperor must have the deepest voice in British theatre booming out across the glade, but the whole scene is messy, unfocused and just bit too silly despite a welcome chance to be upstanding for the Lilliput national anthem,

Veteran children’s writer Mike Kenny and co-writer Satinder Chohan’s adaptation puts in tons of Bolton references, and while there plenty of messages for kids about not fearing the other, there are nods to adults worried about foodbank Britain and Brexit. They wisely keep in the pointless war between Lilliput and their neighbours Blefuscu about which end of the egg you eat first proving Swift was centuries ahead of his time in mocking human stupidity.

The impressive O’Riordan sings the catchy Size Isn’t Everything challenging her dad to do the right thing by her and in the pointless egg war. Out of the gloom wanders a community choir who join the cast in a song about how fab and welcoming their home town is sending local and non-locals alike off into the darkness with a definite spring in their step.