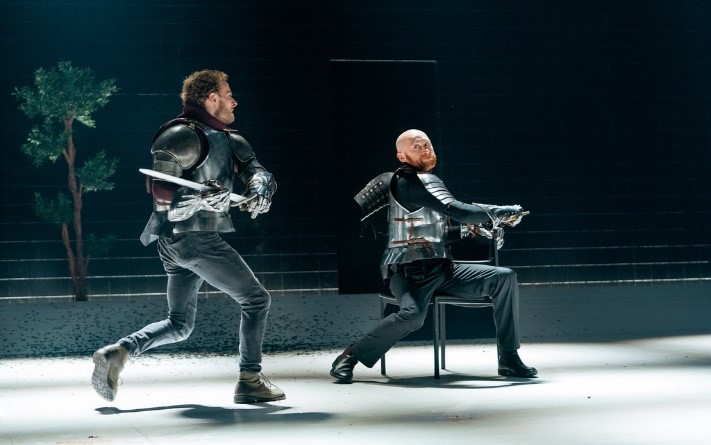 From the beginning the play appears to be stripped back from how we would imagine a Shakespearian play to be. The staging is simple with an aluminium back wall and no furniture at all. The first of the two plays, Othello, begins with Brabantio discovering his daughter Desdemona has secretly married Othello, a Moor. Brabantio accuses Othello of stealing his daughter by witchcraft which Othello strongly denies, saying he won her with tales of his adventures as a General. Othello is needed to assist Cyprus against an invasion by the Turks. Desdemona, Iago, Emilia and Cassio sail to Cyprus and the undercurrents of the plot are beginning to surface. This is a tale of jealousy from Iago’s hatred of Othello for passing him over for promotion, to Othello’s jealousy of Desdemona whom he believes has had an affair.

Throughout this first Act Iago is trying to manipulate and exact revenge on Othello using Cassio and his wife Emilia as pawns in his game. The lost handkerchief is used as per the original play to act as the instrument of proof that Desdemona has been unfaithful. As the play draws on the emphasis is towards the female characters to enable us to have a greater understanding of their plight as the victims, rather than concentrating on the male characters as Shakespeare originally intended. Emilia’s speech entreats Othello to believe Desdemona, but it is all too late, and she exposes her husband Iago for his scheming. Even though the scenes and verse are faithful, the stripping back of the play allows us to understand the domestic violence endured by these women. The brutal nature of the men is made even more dramatic using the aluminium back wall which echo’s around the Theatre when victims’ bodies are being thrown against it. It appears to exaggerate the violence.

The connection between the two plays is running throughout but the use of the three ladies from Othello - Desdemona, Emilia and Bianca who believe that revenge for their treatment is needed and the male traitors should be hung. Their return as the three witches in Macbeth brings this to the fore. 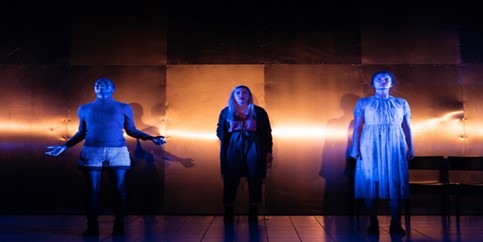 There is a focus on manipulation in both plays - Iago’s manipulation of Othello, and Macbeth being manipulated by the three witches.

The witches plant thoughts into Macbeth’s mind as a test which encourages him towards treachery.

Are the witches culpable? Is Iago culpable?

The era that these plays were written was at a time of witch’s trials and burning at the stake and women being persecuted for trying to be independent. The female characters in the plays were listed as ‘Wife of’ and were frequently blamed for the men’s actions.

In the second play Macbeth, the staging has changed, the metal screen has lifted to show some sparse furniture and an interesting glass box filled with water. This later becomes a symbol of violence as the characters use the water to wash their bloody hands the water turns a dark shade of red.

The sheer scale of the violence in Macbeth is dramatic. Both plays ask a lot of the actors with very few props and simple costumes from modern day the acting is laid bare by the simple backdrop.

The standard of performance was exceptional with particular reference to Sandy Grierson playing a tortured Macbeth and Kirsten Foster a sweet innocent Desdemona and a convincing Iago, Samuel Collings. The direction and ideas to produce a simply staged but powerful play show the imagination of Director Jude Christian and with the show due to move to the Lyric Hammersmith, I am sure this will be a great success.

othellomacbeth has a run at Home, Manchester until the 29th September 2018. https://homemcr.org/production/othello-macbeth/