The Cause - 53Two, Manchester

Marking the centenary year of the first votes for some women, The Cause is an intelligent interrogation of two of the greatest suffrage leaders of the 20th century.

Set in June 1913, this creation is based on a simple concept: an imagined meeting between Emmeline Pankhurst and Millicent Fawcett. Directed by Josie Sutcliffe and produced by theatre company and charity Dreadnought South West, The Cause is a dynamic force-de-force perfectly timed for 2018.

A minimalist stage is dressed with a white sheet background, providing a space for simple yet effective visual projection. Placed in the centre of the set, a white cloth-covered bench is the only prop; its coffin-like presence mimics Fawcett’s concerns over her rival’s hunger strike and frequent flirtation with death.

Setting this meeting in the private, natural space of Millicent’s orchard facilitates the free and open dialogue that makes this feminist production so compelling. This decision strips the play back to a clear portrait of these two key revolutionary figures and the tension between their united aims and opposing methods. 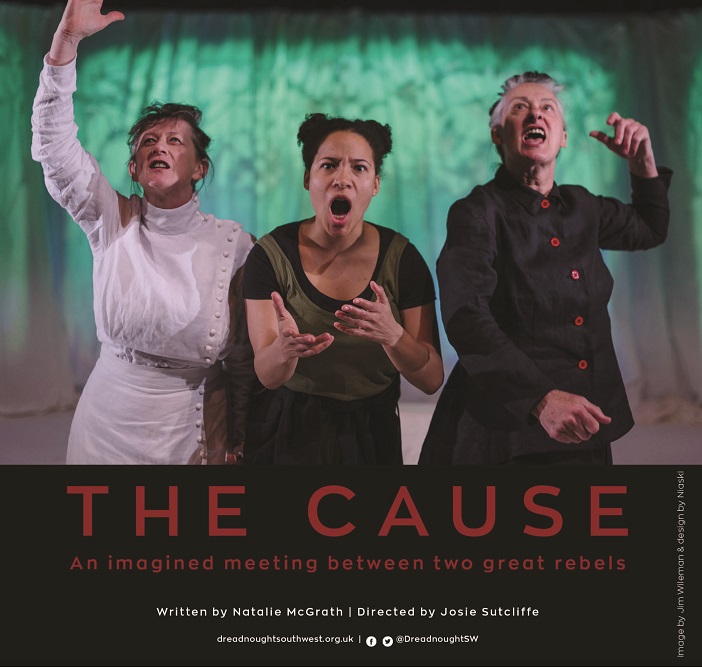 The spirit of both women is embodied with complete conviction; the emotional maturity of Michelle Ridings and Ruth Mitchell’s performances is what makes this production worth seeing. As they argue and debate, the extent of what is at stake ripples through every word and gesture.

Throughout the entire performance, the desperation, frustration and sheer long-term endurance of both women comes across in abundance, thanks to Natalie McGrath’s witty and angry script. Fawcett’s outburst of rage as Pankhurst taunts her with a first stone to throw creates a memorable theatrical climax.

Reference to Emily Davison’s death at the Derby is another emotional peak and effectively symbolizes the contrasting beliefs of the two women. Claimed by Emmeline as her soldier who made the ultimate sacrifice, Emily is used by Millicent as a warning of the suffragettes’ dangerous methods.

In the second act the dialogue becomes a little clunky and didactic, as phrases such as “political metal” slip into more stilted conversation. Yet the high quality acting overrides these rare blips, successfully portraying the powerful impact a lifetime of sacrifice, perseverance and personal risk has upon an individual.

For most of the performance, Sarah Moody’s original score complements the emotionally charged atmosphere and adds appropriate drama to the toned back aesthetics. At times, however, it becomes a little too prominent and even distracting.

Another distraction that lets down the otherwise believable production is the casting of the contemporary young ‘Trumpet’ character. A link between the past and the present, and the actors and the audience, Remi Oriogun-Williams plays the role of youthful interpreter and student of women’s suffrage with, ironically, too much passion.

While a third observational voice seems necessary to break up the unembellished conversation between two women, the energy and contrived poetics of Oriogun-Williams seems out of place. This ‘Trumpet’ character could be an important connection between the present and the past, but sadly is overacted and contrasts significantly with Ridings and Mitchell’s authentic craft.

In theory, this third outsider role gives a sound structure to the performance, as the proportion between the dialogue and commentary is well-balanced and adds to the feeling that we are witnessing a moment frozen in time. But for this to be successful, pitching the right tone is crucial.

Despite this, The Cause is a compelling imagining of two rebellious giants of suffrage history. McGrath’s snapshot of Emmeline Pankhurst and Millicent Fawcett is vividly painted and expertly executed. Watching this performance in Manchester in 2018 couldn’t feel more appropriate.