For their second concert of the season, the NCO pulled off a coup by engaging the acclaimed young clarinettist Julian Bliss to play Weber’s demanding Clarinet Concerto no.2 in a wide-ranging programme of works from the late eighteenth to the mid-twentieth centuries.

In the beautiful setting of the Stoller, ideal for chamber music, the NCO, conductor less as usual, began the performance with Malcolm Arnold’s Sinfonietta No.1. As leader Nicholas Ward explained in his chatty introduction, Arnold’s background as a trumpet player enabled him to write well for the instrument, which features strongly in the third movement of this piece. Although written in 1954, the Sinfonietta has an almost eighteenth-century feel in places, which set the scene nicely for what was to follow. The pizzicato playing in the first movement was very precise, and the boisterous third movement, with the horns prominent, was presented with plenty of gusto. Arnold was an Oscar-winning film composer, and there were points where this felt like superior film music and was none the worse for that. 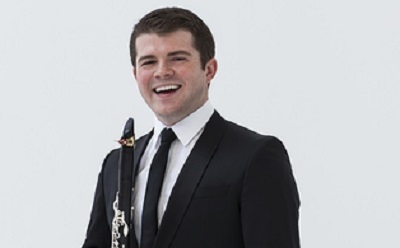 Julian Bliss was then introduced to the platform to play the solo part in Weber’s concerto. Weber wrote the piece partly to showcase the capabilities of the clarinet, following recent technical developments. It was fitting, therefore, that Bliss should be tonight’s soloist, since, as well as being an astonishingly accomplished player, he is also an established clarinet designer. Playing from memory, with no music stand in front of him, he stood centre stage and delivered an exhilarating performance of this very difficult piece. In the final movement Polonaise in particular, the control, power and speed of his playing took the disappointingly sparse audience’s breath away - though not his. We were then treated to an encore of a new arrangement of Monti’s “Czardas.” Bliss infused it with dynamic, occasionally klezmer-style playing of bewildering pace, and earned a deserved ovation.

By contrast, the second half began with Josef Suk’s rarely heard “Meditation on the old Czech Chorale St Wenceslaus”, a single movement piece originally for string quartet, but later transcribed for string orchestra. Written at the beginning of World War 1, the work had an avowedly didactic purpose, “to strengthen the hope in the return of power to the hands of the Czech people when the storms of wrath are over.” The NCO was reduced to about twenty string players for this piece, beginning quietly and sombrely, in a manner rather reminiscent of Barber’s Adagio for Strings, which coincidentally also began life as part of a string quartet. The NCO developed that quiet opening into the central thrilling climax, and then gently let us down with the peaceful ending, expressing Suk’s hopes for the future.

The orchestra was augmented by winds and brass for the finale, Haydn’s Symphony 102, the tenth of the London symphonies, and one written, like the Suk, at a time of political turmoil, in this case the French Revolutionary wars. Haydn’s mature vision in this symphony looks forward to Beethoven, whilst still evoking Mozart in the elegant trio of the third movement. After the slow opening movement, and the dreamy second, the NCO launched with considerable vigour into the third movement Menuetto, and then took us to the rousing final movement in fine style, with really accomplished and spirited playing throughout. Haydn had clearly become a master of orchestration by this point, and the accomplished players of the NCO were able to do justice to this complex and rewarding work.

This was an excellent evening of high-class music making, especially in the Weber, with Julian Bliss demonstrating a level of virtuosity that had to be heard to be believed.