The popularity of TV programmes such as Downton Abbey show that people are fascinated about the master/servant relationship. Many of us have grandparents or great-grandparents who were in service.

Jean Genet’s The Maids is often seen as a political drama. Many see the play an examination of servitude and the relationship between mistress and maid.

Lily Sykes searing production turns it into a vivid psychodrama which plays with ideas of power and dominance in very interesting ways. All the characters want to be in control and are also willing to be controlled.

Interestingly, she decided to cast men to play the mistress and the maids. This added an extra dynamic to a play that is full of binary opposites. It questions such things as love and hate, power and powerlessness, good and evil and most interestingly reality and fiction. 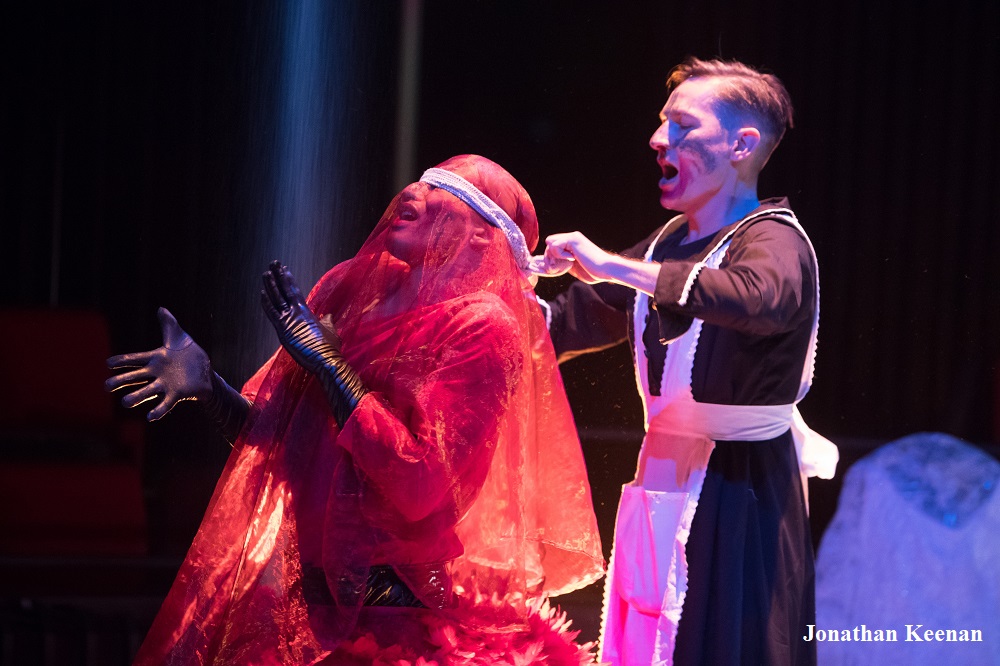 All through the play there were two cameras on stage. At various times the actors would perform to the camera. This added an extra dimension of theatrically to what is already obviously a performance.

The two maids, sisters Claire and Solange, are constantly role playing. They dress up as the mistress and imagine killing her. Like all siblings they fight with each other but their battles take them into very dark places that they are unafraid to explore.

Jake Fairbrother as Claire and Luke Mullins as Solange revel in this psychological gameplay. The chemistry between the two actors is excellent and they manage to portray the fragility and suppressed desire they feel for each other beautifully.

We are told Genet wrote the play when he was in prison and the idea of imprisonment is strongly brought out in the production. Before the play starts the three actors are dressed in prison clothing as they wander around and play with the audience.

The maids are imprisoned in their roles but we find, when the mistress appears, that she is also trapped. Danny Lee Wynter is imperious and vulnerable as the mistress. There was a delicate quality to his performance. The mistress is no tyrant and seems as lost as her servants. In a way all three are outcasts looking for love.

Genet is said to have been inspired by the real murder by two maids of their mistress in 1930s France. People, as we are today, were fascinated by the crime and they wanted to know why they did it.

My only criticism of the production would be that at times the screen displaying quotes and information acted as a distraction and got in the way of the storytelling. There were also moments when things got a bit too frenetic.

That said the play was riveting and they correctly dispensed with an interval because if they had broken it up I don’t think they would have been able to get the energy back.

It is well worth a going to see but Downton Abbey it is not, thankfully! https://homemcr.org/production/the-maids/