What better way to spend Star Wars Day (May 4th) than to travel into space in the company of Captain Tempest and his crew!  Now in its 25th year, Return to the Forbidden Planet has once again taken to the road to travel beyond our solar system taking rock ‘n’ roll music further than it has ever been before.  There is also an appearance by Queen’s Brian May albeit via video.

For a show set in the 1950’s and written in the 80’ it has aged well into the 21st century.  A young and energetic multi talented cast rock the Palace stage like no other show has this year to date.  The cast play at least three different instruments each during this two and a half hour party based on Shakespeare’s Tempest.

Led by Captain Tempest (Sean Needham) this routine space mission runs into trouble as it is drawn towards an unknown planet by Dr Prospero (Jonathan Markwood) having been banished there by his estranged wife Gloria (Christine Holman), who is coincidentally acting as Science Officer on this flight.   Living on this planet is Prospero’s daughter Miranda (Sarah Scowen) and robotic creation Ariel (Joseph Mann).

When Miranda reaches the ship following her father she immediately draws romantic attention from both the Captain and the ships cook, Cookie (Mark Newham).  What follows is a battle to win Miranda’s affections whilst the ship comes under attack from an alien being.

The show is littered with quotes from Shakespeare, most of which you see coming a mile off whilst not detracting from the humour intended.  Add to this a multitude of classic hits from the 50’s and 60’s such as ‘Good Vibrations’, ‘Robot Man’, and ‘Johnny B Goode’ to name just three.

Musically this cast are superb with Newham shining towards the climax of the first half with a stunning guitar solo during the Zombies classis ‘She’s Not There’.  Relayed live on a video screen above the stage the skill of Newham was plain to see during the five minute plus solo.  The ovation from the audience at its climax was justly deserved.

Mann as robot Ariel also stood out with perfect comedic timing.  On this tour however, Ariel is devoid of roller skates, something that the original production and subsequent tours made use of.  Whilst this does not affect the performance in any way, for the purists and fans of the show it is a startling omission.

Scowen plays Miranda with warmth as she is torn between the Captain and Cookie in the love stakes delivering some powerful vocal numbers of which the pick was ‘Mr Spaceman’ by The Byrds.

Forbidden Planet is on its last mission of the current tour which ends in Manchester at the weekend.  Judging by the reaction of tonight’s audience we think a 26th anniversary tour would be very welcome indeed. 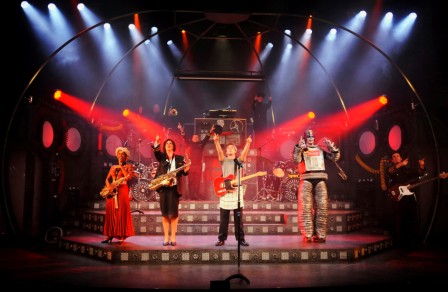