Julie Hesmondhalgh returns to the Royal Exchange in the title role in Anna Jordan’s new adaptation of Bertolt Brecht’s play of war, exploitation and despair. This new version departs radically from the original. Brecht’s play locates the action over twelve years of the seemingly endless Thirty Years’ War in the Germany and Poland of the seventeenth century. Here, we are in the future, beginning in 2080, and countries have ceased to exist: Europe is now simply “The Grid”, and the warring factions are not Catholics and Protestants, but Reds and Blues, fighting to gain control of squares on the grid. Mother Courage’s simple handcart is metamorphosed into an ancient and battered ice-cream van, and her wares now include bomb components and grenades. Oddly, the technology which permeates our lives now has disappeared in this vision of life sixty years hence: in this world, communication is as primitive as it would have been in the seventeenth century.

And this raises a central question about this adaptation: what is achieved by projecting the action into the future? I’m really not sure. This version preserves Brecht’s structure and narrative, with the short scenes each illustrating some human folly. The production uses Brecht’s technique of announcing the content of each scene before it is enacted, with the title of each segment displayed for the audience, here cleverly managed on beat-up bits of cardboard that are whisked away into the air after the announcement. 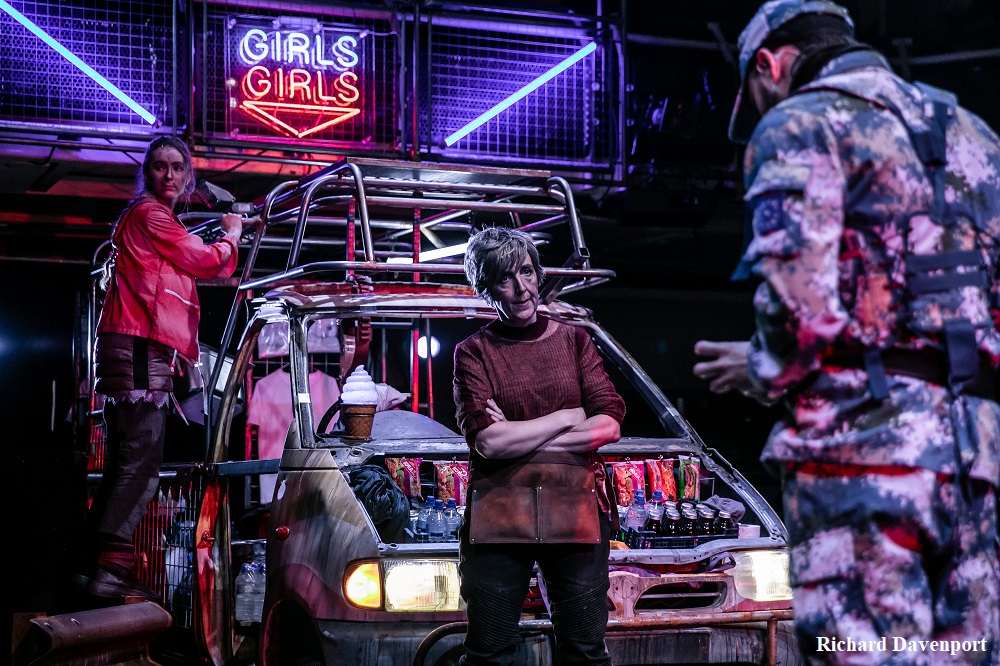 Since technology has regressed in this version, the new setting has nothing to say about the modern world we experience, and indeed, if the ice-cream van were to be replaced with the handcart of the original, one would not notice much different about this version in terms of the visual presentation of the narrative. What is different, apart from the replacement of country names by Grid numbers, is the language. I don’t think I’ve ever heard the f-word used so liberally in the theatre before, to the point where it ceases to shock, and simply becomes normal discourse. That’s a worry, as it means the dialogue fails to make the impact that it should, if Brecht’s anti-capitalist message is to be highlighted.

Hesmondhalgh, naturally, is the centre of attention, and she manages a difficult task very well: striding confidently about the Exchange’s circular stage, she really is a monstrous figure, repressing her motherly instincts, if she ever had any, in pursuit of profit and survival at all costs. She was surprisingly effective in the songs, which sounded like a foul-mouthed Jacques Brel / Victoria Wood collaboration. She is aided by a very energetic and versatile cast, who move seamlessly from role to role as the years progress and Mother Courage’s fortunes ebb and flow.

Rose Ayling-Ellis as the mute Kattrin is particularly affecting, bringing genuine emotion to a play that perhaps is somewhat lacking in it. Kevin McMonagle, playing the Minister, got some well-deserved laughs in his display of self-seeking cowardice. Simeon Blake-Hall and Conor Glean as the sons Eilif and Swiss Cheese were full of vigour, and Guy Rhys as the chef gave the role some swagger. Heddyd Dylan as the prostitute Yvette, first seen in an extraordinary costume replete with thigh-high pink boots, was able to imbue the part with some pathos. Colm Gormley and Tachia Newall differentiated their multiple roles very well.

A special mention is due to solo musician Nick Pynn, playing a variety of instruments, and manipulating recorded sounds expertly to add an eerie soundscape to the piece. Amy Hodge’s direction is unfussy, allowing the narrative to unfold with pace. I wondered what old Bert would have made of it. Certainly, the full house at the Exchange loved this version, and in particular its star.