It is a measure of how far the reputation of Hope Mill Theatre in Ancoats has travelled, that musical theatre legend Stephen Schwartz (Wicked, Godspell, Pippin) was in the audience last night to witness the revival of 'Rags', his 1986 story of Jewish immigrants in New York City at the beginning of the 20th Century. Since its opening in 2015, Hope Mill, under the stewardship of William Whelton and Joseph Houston allied to the keen eye of producer Katy Lipson, has quickly garnered a reputation for producing innovative revivals of underappreciated musicals as well as commissioning an increasing body of new work.

'Rags The Musical' is the newest addition to the canon and Director Bronagh Lagan has worked closely with Schwartz to produce a radical re-imagining of the original show, which takes on a new life in the intimate atmosphere of the 120 seat theatre. 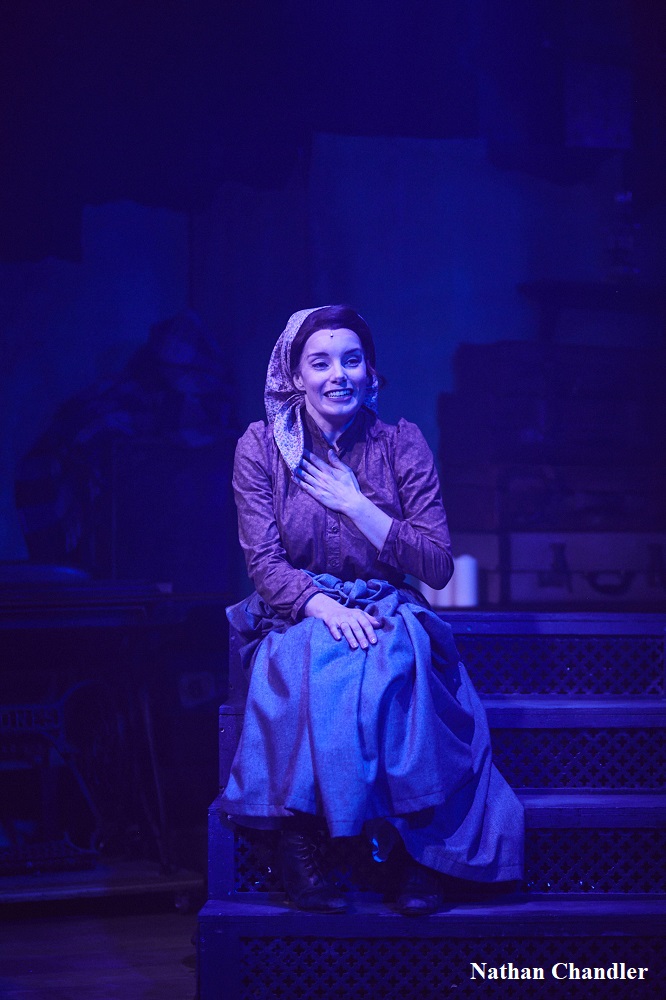 The claustrophobic, teeming world of the lower East Side of New York is beautifully rendered by Set Designer Gregor Donnelly. Washing lines hang from the rafters and the original features of this former cotton mill are incorporated into the set, giving a true sense of the dilapidation and squalor which greeted the immigrant families on their arrival in the USA. We meet Rebecca (Rebecca Trehearn) and her young son David (Lochlan White) at Ellis Island, fleeing from a Russian pogrom which has left Rebecca a widow, they are penniless and look to America to fulfil all their hopes for freedom and prosperity. Befriended by Bella (Lydia White) and her aged father Avram (Michael S Siegel) they begin working in the clothing industry (the eponymous rag trade), where Rebecca's skill as a seamstress soon bring her recognition.

Through this structure, we are able to examine both the rewards and costs inherent in attaining the 'American Dream'. The hard work, ingenuity and striving that produces material wealth and success is contrasted with the necessity of an immigrant population having to remain close and insular to protect themselves from aggression and exploitation. It is this juxtaposition of the individual versus the collective which Lagan highlights throughout the show, with these strands further illustrated by the two love interests that Rebecca develops; wealthy successful Bronfman (Gavin James) and militant union organiser Sal (Robert Tripolino).

Trehearn gives a strong central performance as Rebecca with her beautiful rendition of 'Children of the Wind' a standout moment. The weight of her performance was in the set piece songs however, with the emotional engagement between her character and that of James and Tripolino not fully realised, the intimate nature of the staging making this more apparent. Valda Aviks gives delightful support as Rachel, the elderly widow who sets her sights on Avram, their duet on 'Three Sunny Rooms' demonstrating the clear rapport between them. Comparisons can be made between the character of Avram and Tevye in 'Fiddler on the Roof', indeed the director has described it as a sort of sequel, and Siegel imbues his characterisation with the same mix of world weary cynicism and sharp humour. Kudos also to Lochlan White who was believable as a vulnerable young David, avoiding the saccharine sometimes associated with young performers in an adult company. The ensemble created a strong sense of the varied strands of American culture throughout by turns menacing and engaging with James Dangerfield my particular highlight enacting an unforgettable Jewish Hamlet that had the audience roaring!

The predominant use of piano, clarinet and violin evoked the sense of the Russian and Jewish heritage, particularly plaintive during 'Shabbos' and perfectly executed by the four musicians in the band. The score traced the development of Ragtime and Jazz through this period, and it is clear the love and respect Schwartz and composer Charles Strouse have for this genre. The musicians were seamlessly integrated into the story by Lagan, her impressionistic style was evident throughout, with suitcases and screens used to incorporate the scene changes in a balletic manner which added to the visual spectacle.

At a point in both domestic and world politics where intolerance and antisemitism are on the rise and where immigration is addressed solely in terms of statistics, it is uplifting to watch a story where refugees are portrayed as individuals with hopes, fears, dreams and desires. Originally a flop on Broadway, by breathing new life into a neglected piece, the cast and crew of 'Rags' gave Stephen Schwartz the best birthday present he could have wished for.

Hope Mill have found another gem and polished it until it sparkles.