HOME’s performance of ‘Kingdom,’ is a part of the Viva! Spanish and Latin American Festival, presented by Senor Serrano. This all male cast performed in three different languages; English, Chinese, and Spanish.

The set was an interesting choice, and began with the actors on stage, one dressed in a banana costume, which set the theme for the play. The running theme of bananas throughout represented mankind, as it told the story of Genesis. This was done cleverly with the use of a camera, which connected to a projector on the screen behind, giving the audience a chance to see the action that was unfolding on the table. Props were used such as faux fruit, a model village, and a doll, to give the illusion of reality. 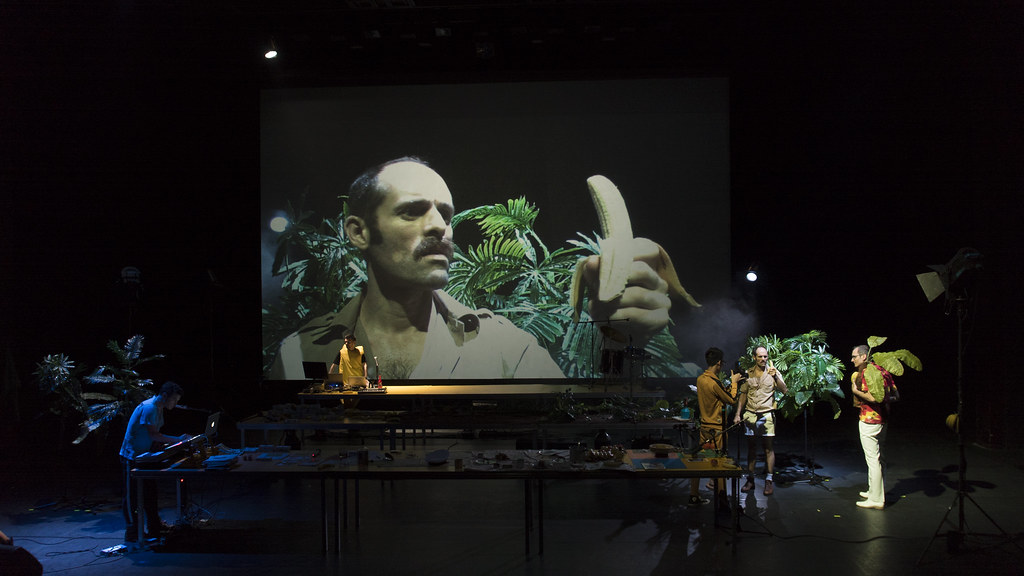 Throughout the play, there were facts about bananas shown onto the screen behind. These facts contrasted with the craziness that was happening on stage, informing the audience of things such as all bananas are clones of each other. Different types of bananas were mentioned, such as ‘Brexit bananas, vegan bananas, and Nazi bananas,’ helping the audience link to different types of people that the bananas portrayed.

The end was the most exciting part for me, when more actors came onto the stage and displayed mankind by performing the haka. This was accompanied by a madness of strobe lighting, and ended with confetti canons being exploded into the audience.

There were many times during the play I felt uncomfortable, and couldn’t help but feeling I left the theatre as if I had missed something. The play continues its performance at HOME until Saturday 13th April.