The Orange Peel is a new production by TilThisNight that explores class, place and obsession through the eyes of a grieving 28-year-old writer, played by Karl Falconer. In this ambitious performance, Liverpudlian siblings Michael and Dani confront each other’s choices of partners and careers over a painfully disastrous and increasingly dramatic dinner party.

Set mainly within one room, we witness four unhappy and unsatisfied young people compete for attention and power over each other, as suppressed desires and resentments come bubbling out from under the thinly veiled guise of ‘getting along’.

Flashbacks of Michael and Dani as children are among the most convincing scenes; as their teenage selves, the sibling relationship is heartfelt and believable. A highly emotional performance from Falconer along with the compelling, versatile skill of Rhea Little make this production worth watching. 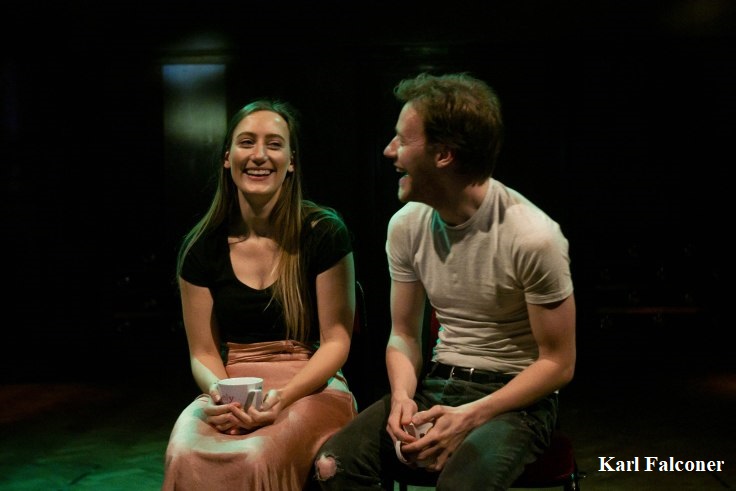 The Orange Peel is cleverly structured and becomes increasingly interesting as it unfolds. Act Two especially adds more variety and unexpected shifts in time and character, revealing more about the two siblings’ partners Harry and Rebecca. Yet while the simplistic set and use of space is fine for this relatively small-scale production, a more creative use of props and a greater segregation of space could boost the visual interest further.

The main issue with this play is that parts feel a little too contrived and lacking in subtlety; although aiming for naturalistic conversation overall, long periods of uninterrupted dialogue seem indulgent and unrealistic. If these highly descriptive observational passages had been contained to just Michael’s character it could be forgiven, but it seems erroneous to share this tendency for poetic contemplation between all four characters.

The script could therefore be tightened and simplified as the reflections on class often sound a little forced. Prolonged debate about the 18th floor is just one example of a forced contrast that doesn’t quite work. Shoe-horned in as a supposed signifier of wealth, the floor count doesn’t fit logically with the reality of housing in the 21st century. Many young people today are living in rise-rise apartments or flats: having 18 floors is equally as common in a shiny new gentrified building as it is in an old Thatcherite council block.

Despite this, The Orange Peel explores themes of dependency, loss and abandonment in nuanced and refreshing ways. On top of Michael’s renewed need for family support, his attachment to place, to one house, is suggested to be intrinsically linked to his working class background. The presentation of Michael’s strained sense of self is arguably at odds with the millennial shift in identity from something that is given to you to something you can choose and control.

Much has been written and discussed in recent years about the so-called millennial identity crisis, which in part can be attributed to the growing obsession with individualisation. While identity is still strongly rooted in community, these communities are no longer defined by one particular place. A millennial identity is likely to be a multi-faceted combination of ‘communities’ who share personal things in common such as sexual orientation, political beliefs, or interests. Identity is therefore a result of ‘knowing who you are’ rather than remembering where you’re from.

Tackling this complex relationship between millennial identity and class is what ‘The Orange Peel’ does boldly and successfully, so in content it is a promising piece of work. Yet considering the overall performance and execution, artistically it could still benefit from greater creative development. Overall, however, The Orange Peel is an ambitious and relevant play for 2019.