Winston Churchill once represented the town of Oldham as a Member of Parliament. Over a century later, the former Prime Minister would no doubt be delighted to see the glorious Coliseum Theatre producing a political play concerning the relationship between a monarch and a Conservative leader. He also wrote that 'History will be kind to me, for I intend to write it’, and it is the tricky subject of legacy and perception that Moira Buffini tackles in this 2013 satirical comedy.

Based on imagined conversations, it depicts the weekly meetings between Queen Elizabeth and her first female Prime Minister, Margaret Thatcher during her time in office (1979-90). Buffini then takes us on a journey through the social and political history of the period from the differing perspectives of these two iconic figures. We are aided in this by the device of both main characters being represented by two actors simultaneously; an older Queen (Susan Penhaligon) and Thatcher (Sarah Crowden) acting as spectral commentators on their younger '80's incarnations (Caroline Harker and Alice Selwyn respectively). This structure allows a delicious 'inner voice' of the characters to be revealed to the audience, as the two women discuss the affairs of state and attempt to develop a personal relationship over the ensuing decade. Given that these meetings were never recorded in any way, Buffini derives great humour from conjuring the friendly disdain of the Queen juxtaposed against the gauche and humourless Thatcher. 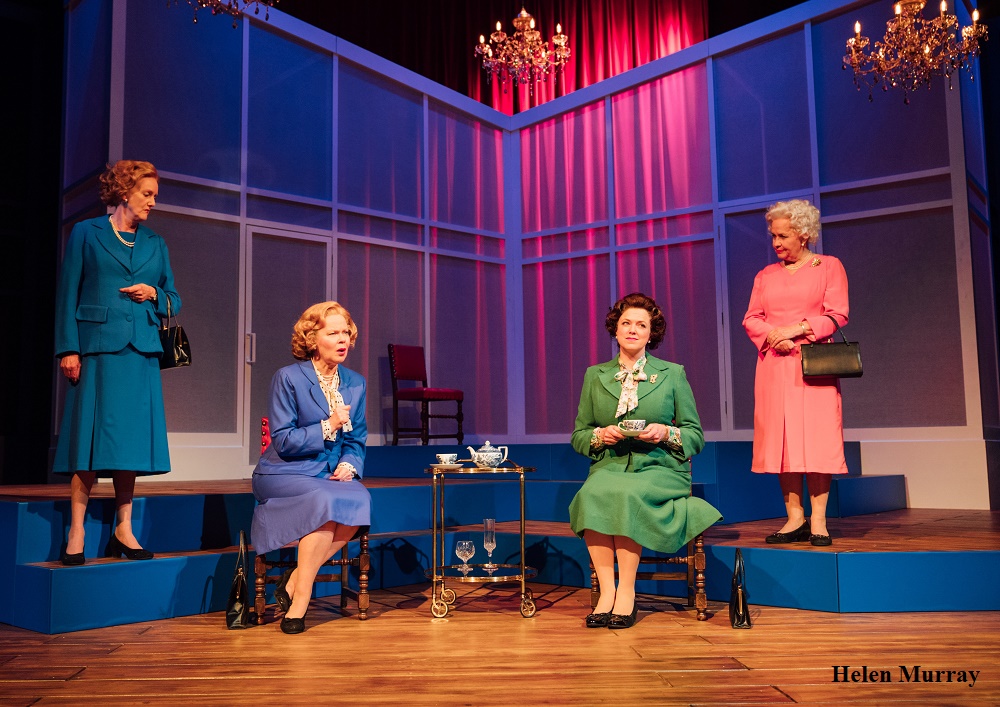 Crowden absolutely nails the voice of the older Thatcher in its strident, determined certainty, whilst Selwyn shows us the earlier, nervous woman as less experienced but equally adamant. Harker demonstrates a young Queen who is already an experienced political operator who will grow into the older Penhaligon character, calm and stable in times of crisis. The 'meta' nature of the play was further enhanced by the supporting roles, with Jahvel Hall and Andy Secombe constantly breaking the fourth wall, commenting on events and supply historical exposition to audience members who may be unfamiliar with the minutiae of 1980's politics. This was particularly effective at the opening of Act Two, with Secombe attempting to explain to the younger Hall what a hugely divisive figure Thatcher was to his generation. Both actors were also required to play myriad supporting characters throughout the evening, and great humour was derived at the expense of everyone across the political spectrum from Arthur Scargill to Enoch Powell via an unforgettable Nancy Reagan!!

As we move through the decade all the 'Thatcher Greatest Hits' are represented; election success, Rhodesia, Falklands, Reagan, privatisation and the Brighton bomb as Crowden seeks to convince the audience of her unassailable place in history. Her version is constantly challenged and reassessed by the other characters as they bring up riots, unemployment, the miners’ strike and the Poll Tax. A very enjoyable political pantomime for the audience to boo (and to a lesser extent cheer), according to persuasion.

This genre of 'peeking behind the curtain' history is immensely popular and reaches its zenith in the work of Peter Morgan, both on stage (Frost/Nixon, The Audience) and screen (The Queen, Netflix 'The Crown'). Whilst Buffini does not scale these lofty heights, 'Handbagged' poses some interesting questions on the way in which we perceive our own recent past, and debunks some of the Thatcherite myth that is seemingly more ubiquitous as the decades pass

A hugely fun evening, especially for anyone of my vintage who lived through the events depicted, it points up how the divisive nature our modern political discourse is based around the schisms that developed in society during the 1980's. Another Churchill aphorism was 'Those who fail to learn from history are condemned to repeat it'; Penhaligon received the biggest laugh when discussing 'a Prime Minister who doesn't know when to leave the stage'. It was May, not Thatcher the audience were thinking of.

Verdict: A very enjoyable political pantomime for the audience to boo (and to a lesser extent cheer), according to persuasion.