The Arden School of Theatre’s third year Theatre and Performance students have finished their degrees and to celebrate they put on the UnTaPped festival this weekend at Impossible Bar in Manchester alongside other students on the course.

The sixth festival of its kind was a great coming together of a whole range of medias set over two days around the trendy bar’s theatre space. UnTaPped showed absolute promise for the next wave of professionals entering the entertainment industry.

Throughout the day you are free to move around the space and visit stations hosting radio plays, sound installations, one act shows, short films, songs, main stage performances and the programme is interspersed with snippets of dance and performance – the theme of this year being ‘circus’ so there was hula hoops and strange curiosities surprising you between performances. 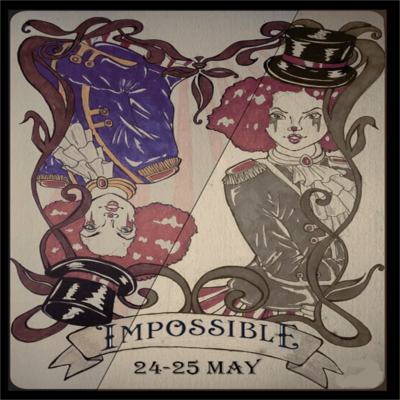 There were great themes explored by the students generally, a lot of inclusivity and acceptance, most poignantly delivered through short film and original song ‘Stronger Than You’ by Jessamine Vowles which was a beautifully depicted moving song about being yourself and being okay with that.

We had more acceptance and friendship explored in ‘Friendshit’ which hilariously broke down the fourth wall by showcasing the daft things we put up with for our best friends, through awkward hugs and arguments about nothing as well as being supportive of each other’s dancing habits!

The highlight of the day had to be the hilarious short film ‘Tampon Time’, produced to break down taboos around menstruation. A hilariously put together social experiment and original song saw two students dress in giant tampon costumes and head out around Manchester City Centre, much to the amusement of the audience. A light-hearted but important addition to the programme of the day! I would love to see this piece used to promote local movements like The Monthly Gift MCR.

‘Hamlet Hands’ by Dan Saunders was a really interesting experiment exploring whether language is purely an auditory experience where the hands do all the talking. The results were surprising and it’s great to see BSL being explored alongside mainstream delivery methods.

‘The Anti Chameleon’ by Lauren Ashleigh O’Hara was a great representation of what it means to stand out in a society of people who are all just longing to belong. There was a great use of music to invoke meaning and direct the one-woman show through a metaphor narrative of living in a ‘purple world’ but being fascinated by the idea of ‘other’.

The circus theme was enabled by the venue and the ‘surprise’ performances throughout the day, as well as the students having to invite people to come and visit their station and ‘drum up’ visitors for their work – particularly well done by Rory Kelly who spent a lot of the day in full costume for his and Stacie Tilsley’s ‘Make Pasta Great Again’ and interacting with the audience in the build up to their political satire at the end of the programme of events.

The multidisciplinary skills The Arden is teaching were evident and it was great to see a range of talents where individual projects had clearly been pursued by the students rather than prescribed to perform someone else’s work.