This particular Cirque de Soleil show was inspired by James Cameron’s ‘Avatar’ and takes the audience on a journey through many different lands. It highlights various struggles and immense effort from the performers in each ‘new land’ and immediately creates an atmosphere of intensity for the audience from the outset. However, a feeling of intensity at a Cirque de Soleil performance was a surprise for me and not exactly what I was expecting.

There is no doubt at all that there was talent in abundance on stage in terms of every performer. However, if I’m honest I would have preferred much more acrobatics and less ‘running about’. This was also what I had perceived a Cirque de Soleil show to be about. The stunning acrobatics from all performers unfortunately never really seemed to be the focal point at any stage in the show. As there was so much going on at the same time on stage it was hard to know where the audience should focus. The acrobatic rope work, whilst extremely impressive, was quite one dimensional and similar styles were repeated. This resulted in a not entirely impressed audience following the repeats on stage. 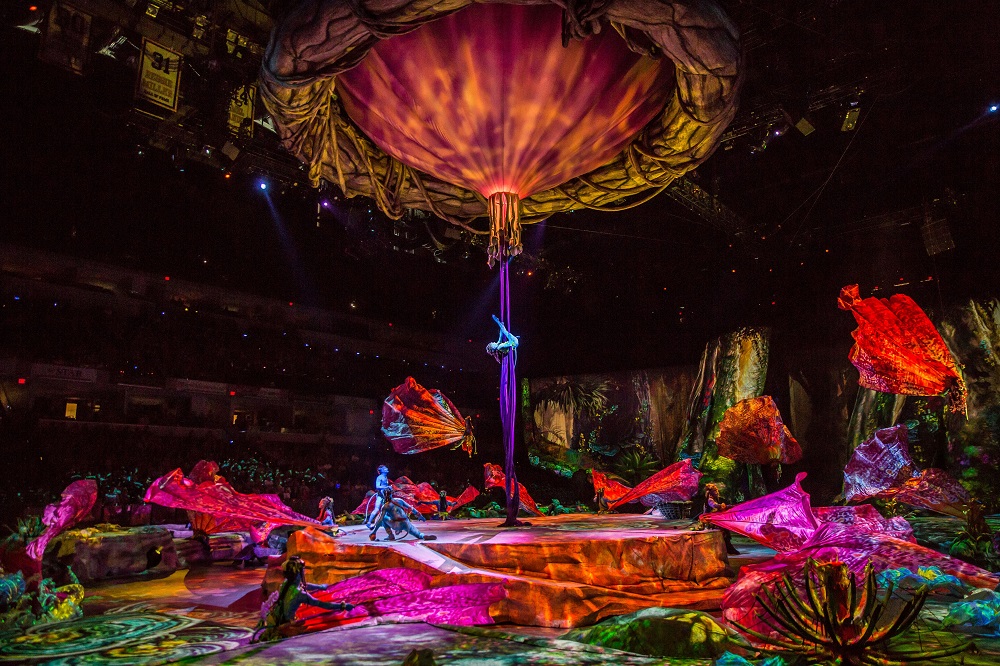 Costume was superb. A vision of blue Avatars in the main but costumes such as the flower scene was an uplifting visual amidst a fairly intense atmosphere of ‘a struggle’ in other scenes. The show in parts also demonstrated a smattering of ‘Lion King-esque’ puppetry. The dogs and the horses were excellent. The flying scenes were inspiring, and the birds were for me the best aspect of the puppetry.

The special effects were very impressive. The creation of an earthquake and water in the centre of the arena was well executed. The climbing up a rock face was very realistic in the way it was created through special effects and film work. It was quite astonishing how this was created and certainly impressed the audience.

The accompanying music, although not live, was extremely loud and alongside the music the Narrator did a good job of joining all elements of the show together. In many ways there was potentially ‘too much’ narration. It was hard to know where to focus on at times as the narrator moved around, and even appeared amongst the audience in parts. As the story was being relayed in the centre of a large arena it was easy to miss aspects of the story that was at times hard to follow.

There was also an interesting element to the show where the audience could interact through the use of a mobile app and so their phones appeared as the stars in one scene for example. However, several audience members near me struggled to do this in time and I was aware of some apps not working. A great idea, but for me it added another layer of confusion as it seemed to separate the audience in groups of those with the app and those without and again, took away from the performance.

There is no doubt that the whole stage show is stunning but if you expected a full on, circus- like energetic atmosphere you may be disappointed. If you are a fan of fantasy, special effects and storytelling then you’ll love it.