As part of the Manchester International Festival, Phelim McDermott and Philip Glass have bought their collaboration Tao of Glass to Manchester.

McDermott’s multi-disciplined career includes directing operatic pieces but also exploring and performing creative theatre with improvisation via Improbable and Devoted and Disgruntled. The recent Global Improvisation Initiative led by Improbable and Devoted and Disgruntled, provided delegates with the opportunity of releasing themselves from any preconceived ideas.   It gave them chance to explore and express their ideas through improvisation, with the emphasis on shared experience. McDermott has previously directed Philip Glass’ operas Satyagraha, The Perfect American and Akhnaten.

I could not write this review without listening to Philip Glass’ music. The hypnotic melodies help to transport me back to the Royal Exchange Theatre and to immerse myself in the story. 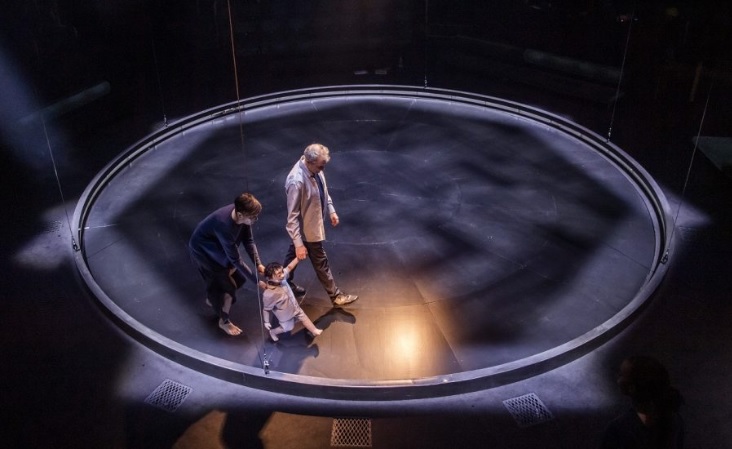 Even though their paths have crossed before, this piece is a very personal one and shares Phelim McDermott’s intimate thoughts and emotions that helped to drive him along the road he has taken.

The Royal Exchange Theatre is a place that McDermott spent time at when he was young and always wished to come back here to put on a show. It is clear at the outset that this theatre holds many memories and emotions within it for McDermott. The ‘in the round’ setting lends itself to this intimate inclusive experience as the revolving stage means that you always feel a part of the production.

The lighting and staging have been imaginatively designed by Colin Grenfell and Fly Davis respectively.

I will admit at this point to not knowing much about Taoism before I saw this production. My understanding is ‘it’s a harmonisation with nature by balancing the yin and yang, developing ‘chi’ (mystical breath) through meditation and dis-engagement’.   McDermott described the ‘cone’, which alludes to your mind’s three states during meditation, the essence being the deepest state, when your mind releases from its everyday thoughts.

I linger on these points as both Glass and McDermott seem to mutually benefit from the idea of allowing your mind to wander freely down its own path.   Bringing together this like mindedness has given the audience a wonderful marrying together of improvised music and performance at its embryo stage. The directing collusion between Kirsty Housley and McDermott left McDermott free to concentrate on his performance which is completely natural in its execution.

The completed piece is relaxing, whilst also stimulating to your mind and emotions. It would be difficult not feel connected with the journey as we feel we are treading in the footsteps of McDermott’s life.

The puppetry is performed by David Emmings, Janet Etuk and Sarah Wright. The little boy puppet is used as both Mickey (from the book ‘In the Night Kitchen’) and Ridley (Phelim McDermott’s son).   The artistry and fluidity used in their performances adds to the theme of ‘harmony with nature’. They make it look effortless, but I can only applaud the imagination at work here.

Finally, the music written by Philip Glass that has so inspired McDermott hauntingly follows the story. The musicians are part of the whole production and help to glue everything together. The natural rhythm of Glass’ music suits the style of the storytelling and keeps the audience connected with the reason behind the birth of this project.

There is only a short run at the Royal Exchange Theatre and I would urge you to go along and experience this production. The show runs from 15th July 2019 to 20th July 2019. Tickets can be booked at https://mif.co.uk/whats-on/tao-of-glass/ via the Manchester International Festival website or via Royal Exchange Theatre https://www.royalexchange.co.uk/whats-on-and-tickets/tao-of-glass