There is a Light That Never Goes Out - Royal Exchange

If the epithet ‘Luddite' is used at all today, it signifies someone who is behind the times, resistant to the technological changes that are taking place in the world. It may be someone who is unfamiliar with social media or using a mobile phone, in any case it a derogatory term with negative connotations. In this new production, the Kandinsky Theatre Company set out to explore the origins of this little known story and perhaps make us rethink the place the Luddites have in working class history.

Rather than placing the story in its early 19th century period setting, Director James Yeatman along with Designers Naomi Kuyck-Cohen and Joshua Gadsby have given us a semi-staged production, with actors using modern dress and language to tell the story, interspersed with readings from contemporary accounts from newspapers and letters. This is all delivered up on a striking stage comprising a large 'Red Wedge', a subliminal nod to Soviet era collectivism and a Constructivist symbol of rebellion, and stand microphones acting as minimal props. 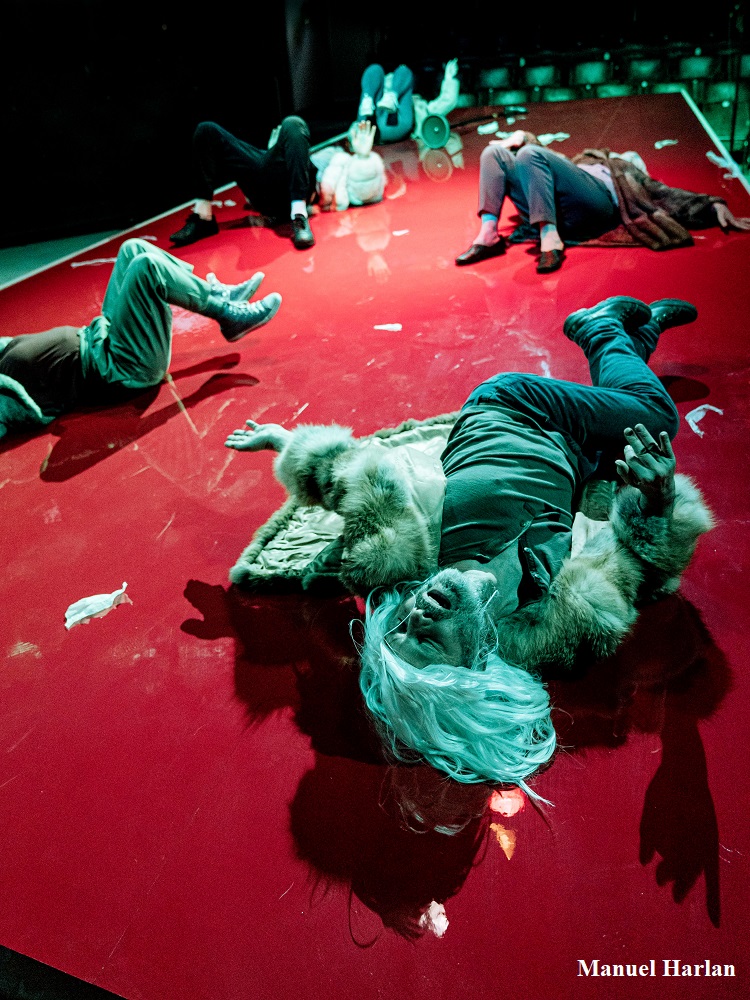 We learn of the Luddite rebellion through the eyes of Thomas Kerfoot (David Crellin) and his daughter Clem (Katie West), weavers from Westhoughton in Lancashire, who see the introduction of machinery into their mill through widely differing lenses. Clem sees the opportunities that the technology will bring, whilst Thomas perceives only a threat and joins the radical Luddite sect, who become increasingly violent in their political methods, culminating in the burning down of the mill in April 1812.

The cast of six actors each play a variety of roles, with Reuben Johnson excelling as the Luddite informant and Burton (Daniel Millar), the ostensibly Liberal factory owner (Lenin's 'useful idiot'), who reverts to capitalist type when his position and assets are threatened. The character of Ned Ludd, the eponymous leader of the rebels, makes a striking appearance after the interval; clad in a long black coat and broad brimmed hat, he flits in and out of scenes as a shadowy figure, fanning the flames of riot and uprising. Whether or not Ludd actually ever existed is debatable, but his implied presence encouraged the rebellion and frightened the establishment, less than 25 years after the revolution in France. Although ultimately unsuccessful, the Luddite rebellion was the beginning of the working class struggle for recognition, leading to Peterloo nine years later and eventually changes to workers’ rights and the voting franchise.

As a piece of theatre, it was only partially successful. I found the chronology of events was muddied and the narrative structure lacked cohesion, with some characters not being fully realised. The feeling of confusion was added to with a delay at the start due to 'tech difficulties', the irony of which was not lost on the audience given the subject matter of the play. I also felt they could have made better use of the wider Exchange building, where a Luddite riot actually took place, to illustrate the events.

'There is a Light....' implicitly seeks to draw out the parallels between the struggles of the 19th Century weavers of Lancashire and their modern equivalents working for Deliveroo, Amazon and Uber, all these workers are fundamentally insecure in their employment and subject to the advances of technology that will eventually take away their jobs.

Manchester will commemorate the bicentenary of Peterloo next month and the part played by these earlier political protesters should not be forgotten by our city.

Verdict: A timely and relevant message to the architects of our Northern Powerhouse.